As the holidays roll around and the family gathers around the table to feast and enjoy each other’s company making memories.

The person who has the duty of carving the meat is essentially the one in control of how the night will turn out.

What if the person who is supposed to carve the ham is you? What if you don’t have an idea regarding how to carve a ham?

Well, don’t you worry by following these simple steps you will be able to carve a ham in the most satisfying way. So, buckle up you are in for a ride that is going to be easy to follow.

Ways to Carve a Ham:

Essentials needed for carving the ham or the tools required to do the job:

Step 1: The bone needs to be picked 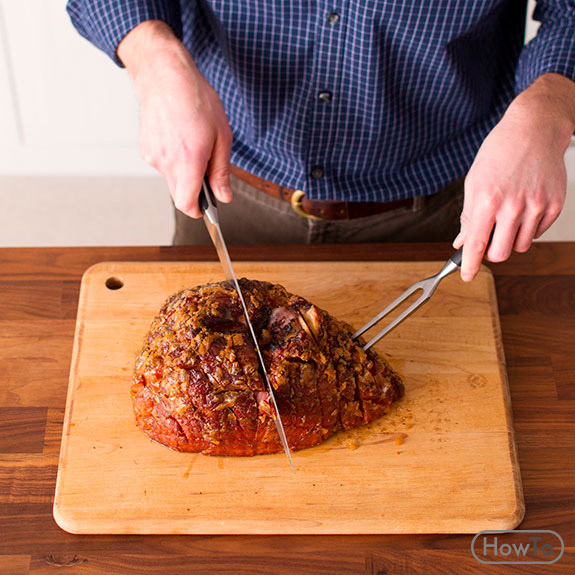 Starting off with the first step, which is to detangle the bone from the rest of the meat. So layout all your essentials and let’s get to it.

Firstly lay out your meat on the carving board and make sure everything is within your range to assist you in this job.  Use a paring knife to make small incisions around the bone in the ham to help to loosen it up from the meat which would make it easier for you to slide out the meat around the bone.

You don’t want the incisions to be too big or too small they need to be just wide enough to help you in freeing the attached bone.

Step 2: The carving knife and the carving fork to Carve a Ham 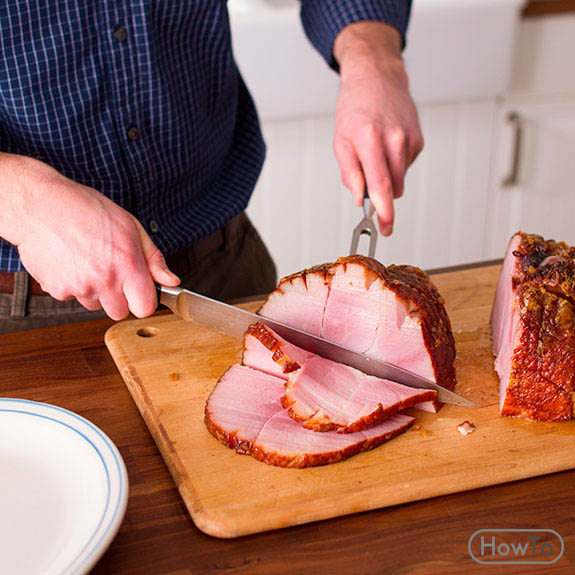 Put your pairing knife to the side and with the help of your carving knife cut a horizontal line above while using a carving fork to hold the meat in place for precise cuts.

This might be the tricky part but once you get the hang of it. It is nice and easy from this point onwards.  Remove the entire section above the bone and put it aside by cutting it out with the help of a knife.

The reason why a carving board is a preferred surface tool is that the juices would remain intact in a way and the kitchen counter is usually not an ideal place for any meat to be cut. 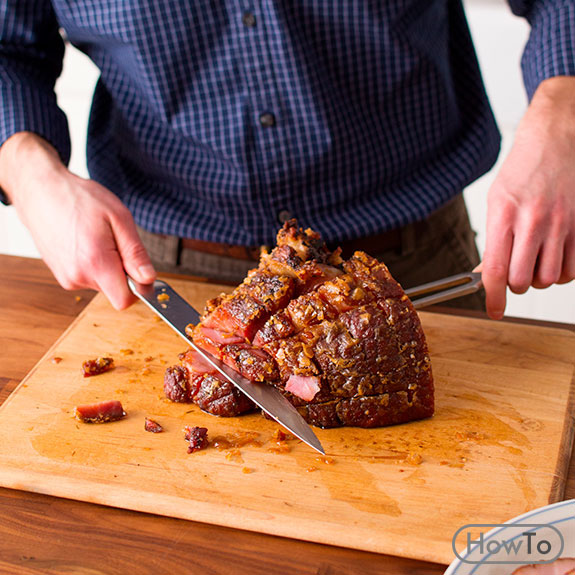 Now is the time to use the slicing knife, which might seem intimidating at first but is actually really easy to use once you understand its functional aspects.

With the help of the slicing knife make a large cut at the side and along the bone so remove the meat that is left. You might need to hold the meat at an angle to help in cutting it easily and not botching it up.

A recommendation would be to use sharp knives that would easily slide into the meat without much effort to enable precise cuts that are done effortlessly.

Step 4: Cut them slices out 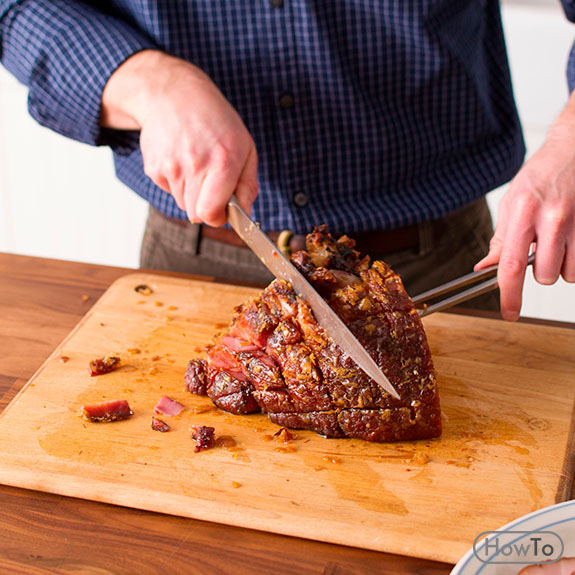 Now is the time to make the slices and serve them up to your guests. With the help of a slicing knife cut between the lines and voila you will have the perfect ham slices for your dinner or lunch whatever you want to do with them.

Super easy to cut and upper easy to use. The best thing is that these steps are very easy to carve a ham and with the right set of tools you can achieve it quite easily. You can use the ham slices in sandwiches or salads or as a side with the pile of mashed potatoes.

Carving ham might not be as difficult as it may seem to you but with the help of these steps, you will be able to achieve the perfectly carved ham.

However, if things do not work out the way you had thought they would then no worries not everyone is able to carve the meat perfectly but it would be recommended that if you do not know how to carve ham then do not volunteer. Also, sharpen your knives before making the decision of cutting out slices otherwise the perfectly cooked meat would be ruined. So have fun while carving your ham.

How do I carve a ham with a bone-in it?

Do you cut ham with the grain or against?

How long do you let a ham rest before carving?

Remove from the oven and let the ham rest for 15-20 minutes before carving.

How do you cook a ham without drying it out?

This means when you’re cooking a ham, you just want to heat it through. The best way to do this is to cook it on a low temperature so the outside doesn’t dry out before the inside is heated. To cook a spiral ham without it drying out make sure you use a meat thermometer to reach 140°F and do not overcook it.

Do you add water to bake a ham?

Gently cook the ham with at least 1/2 cup of water, wine, or stock in the pan and cover it with foil to make sure the ham won’t dry out (until you‘ve applied the glaze—then, the foil comes off).

Should I cook a ham covered or uncovered?

Ham is best reheated low and slow, and heating it uncovered means that the moisture in the ham evaporates, leaving it dry and unappetizing. → Follow this tip: Place the ham cut-side down in a baking pan. Cover the ham with foil or use a baking bag to heat up the ham until it’s time to glaze.

When should you glaze a ham?

Do you rinse ham before cooking?

WHEN SHOULD I ADD THE HAM GLAZE TO THE HAM? Most ham recipes should be glazed towards the end of cooking, so the sugar doesn’t have a chance to caramelize too much. When there’s about 20-30 minutes of total time left to your baked ham, pour the brown sugar glaze over the top and put back in the oven to bake uncovered.

How much ham do I need for 8 adults?

Preheat the oven to 325°F. You don’t need to wash a ham before baking. If you ask us, baked ham is delicious even when you leave it plain; however, scoring a diamond pattern with a chef’s knife in the outer layer and brushing on a glaze during baking makes the ham a showy centerpiece and adds flavor.

How do I cook a shank ham?

How Much Bone-in Ham do you Need?

Can you eat ham shank?

While the shank looks pretty as a picture and shaped a little like a funnel it retains its portion of the femur, plus a shank bone which makes it more difficult to carve. It’s very flavorful but it does tend to be a little tougher than the butt half.

What temperature do you cook ham to?

Heat oven to 325°F. Remove all packaging materials. Place ham, cut/flat side down, on rack in shallow roasting pan; cover tightly with aluminum foil. Heat approximately 18 to 23 minutes per pound until heated through.

How do I know when my ham is done?

The meaty parts require a lot of cooking to become palatable. That’s not to say they can‘t be eaten by themselves. Ham hocks are eaten whole in many traditional European recipes (like the German Eisbein or Polish Golonka). Most often, though, they‘re cooked slowly with soups, vegetables, or sauces.

Preheat the oven to 325°F. To heat the ham, place it on a rack in a shallow roasting pan, and bake uncovered. For a whole ham, allow 15 to 18 minutes to the pound; for a half, 18 to 24 minutes per pound. The ham will be ready when the internal temperature reaches 140°F.

Can I smoke an already cooked ham?

It is best to reheat them gently in a 325-to-350 degree oven until the internal temperature reaches 135 degrees. According to www.honeybaked.com, their hams should be reheated in a 275-degree oven, covered with foil for 10 minutes per pound. At grocery stores there are many brands of fully cooked ham.

Do you wrap a ham in foil to smoke?