Who lives in a pineapple under the sea? That’s right, it’s SpongeBob Squarepants.

This famous cartoon was aired on Nickelodeon for the first time in 1999 and since then, it has a history of entertaining both children and adults of all ages for the last 2 to 3 decades.

People all around the world love the SpongeBob cartoon, and rightly so. After all, who wouldn’t love a cute square-shaped cartoon, yellow in color, that looks like a household sponge.

He lives in a pineapple under the sea and works at a restaurant called Krusty Krab. His friends include “Patrick” and “Sandy” (who is a squirrel). He works for Mr. Krabs who is the owner of Krusty Krabs whose only goal in life is to make as much money as possible.

The cartoon is regarded by many people as their all-time favorite. The best thing about the show is that as the show progressed and new episodes were added, the quality of the show went on improving; this was something that has not been seen in many new shows.

One of the things that people love about the show is the innocence of SpongeBob’s character. He works very honestly to earn his livelihood and is very loyal to all his friends.

If like us, you’re also a die-hard fan of the show and with a hidden talent of artistry, you might be wondering “How can I draw SpongeBob?”.

Using our step by step guide, you can draw the SpongeBob character very easily. Just grab a piece of paper and a pen or pencil. After drawing, you may also use colors or crayons to color them. 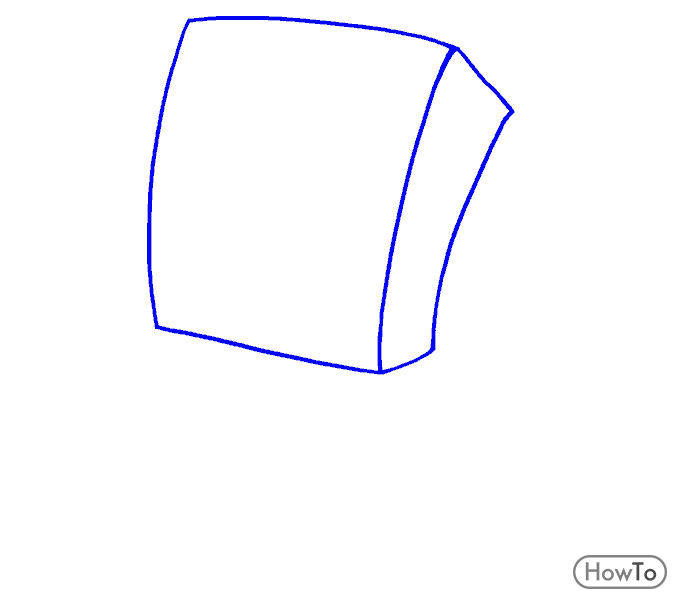 First, draw the shape as shown in the figure. It is kind of a rectangle that is wider at the top and narrower at the bottom. This will act as the base or the body. 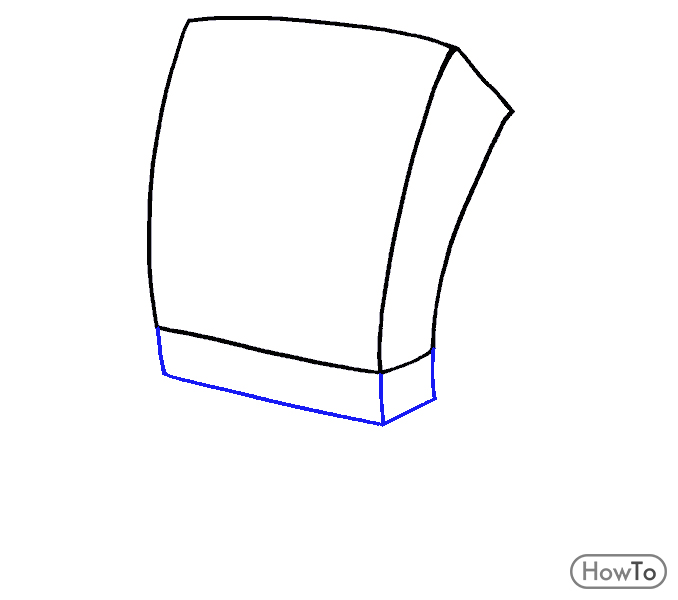 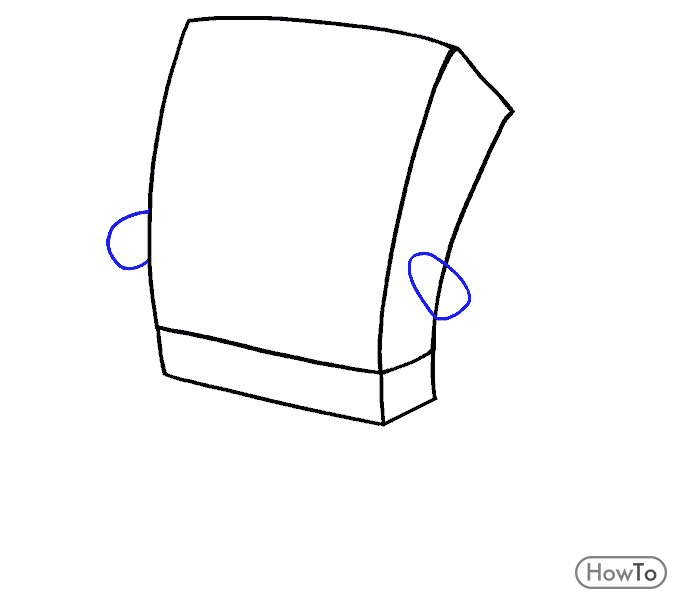 Then, make curly lines at the top 3/4th of the body. 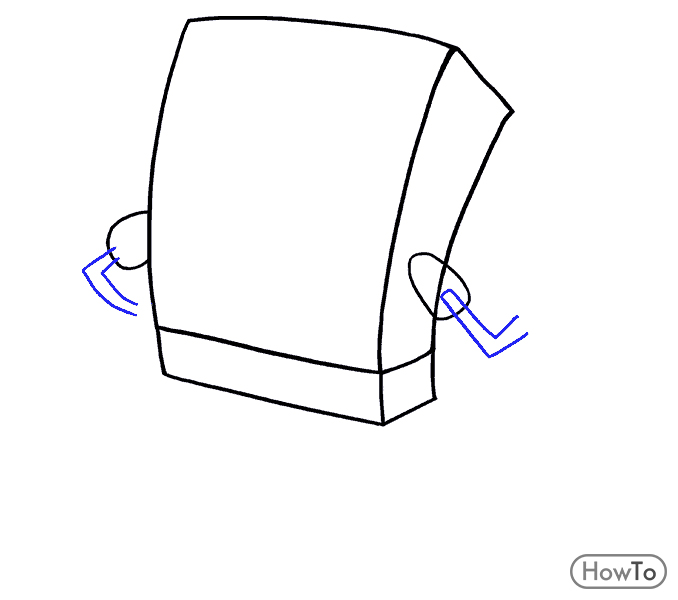 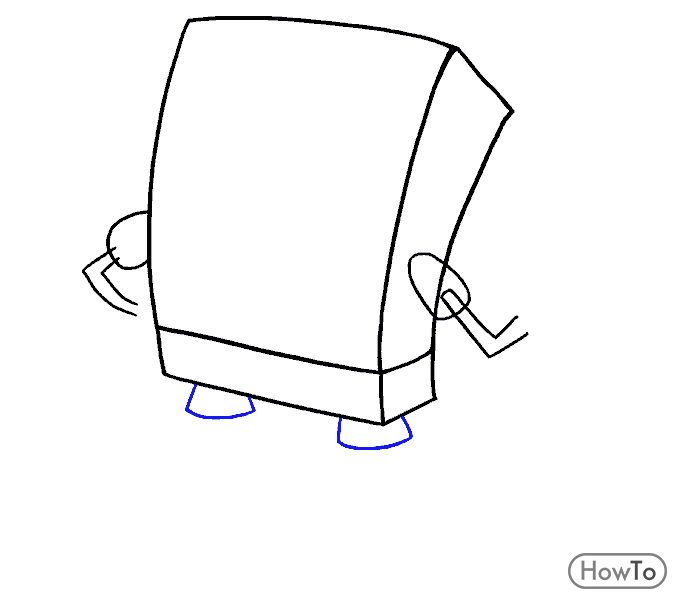 Now, make a rectangle below the body. This will act as the pant and shirt. Also, sketch 2 curved lines below the rectangle; these will be his legs. 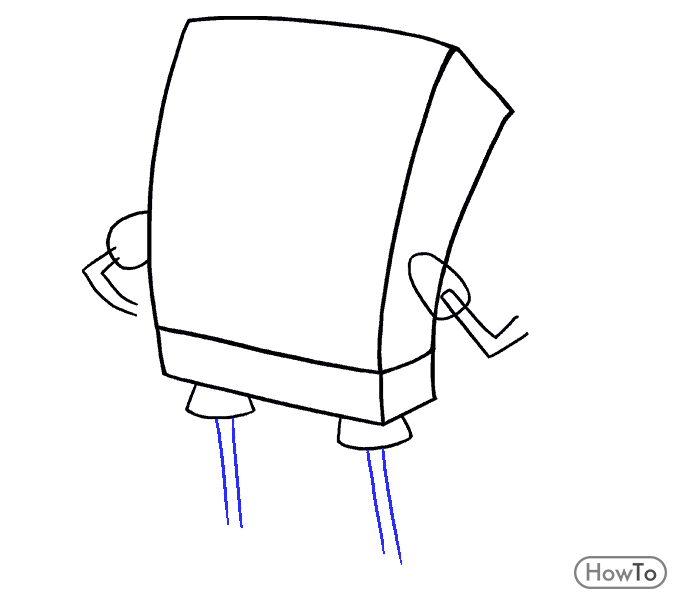 Next, draw the letter W just below the top 3/4th of the triangle; this will act as his shirt’s collar. For his tie, first make a circle, then below the circle, make 2 outward-directed lines, joining them by the letter V. 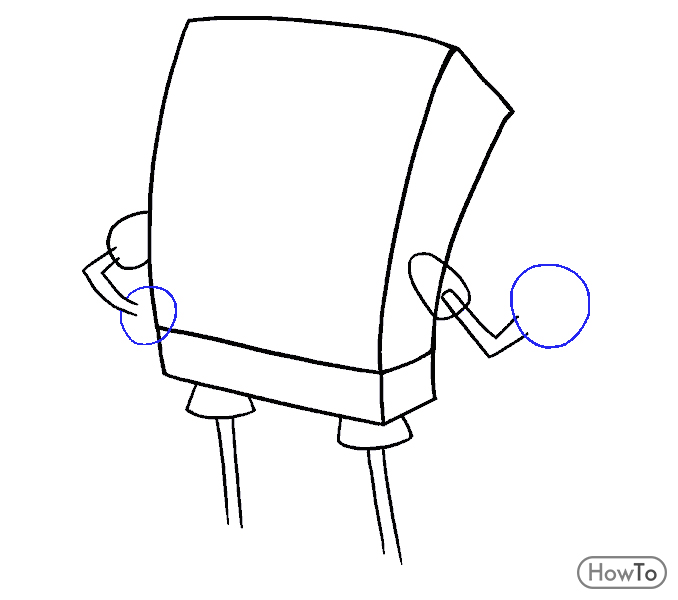 Now, draw a line below his tie to show his pants. Also, sketch 4 rectangles to show his belt. 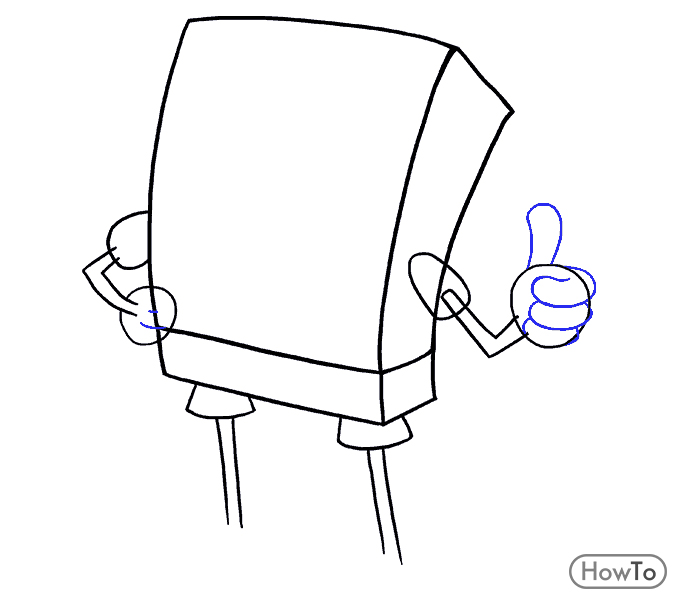 To show his shirt sleeves, on the side of his body draw the letter L and on the other side draw a backward L. After that, sketch the lines shown in green in the picture below. 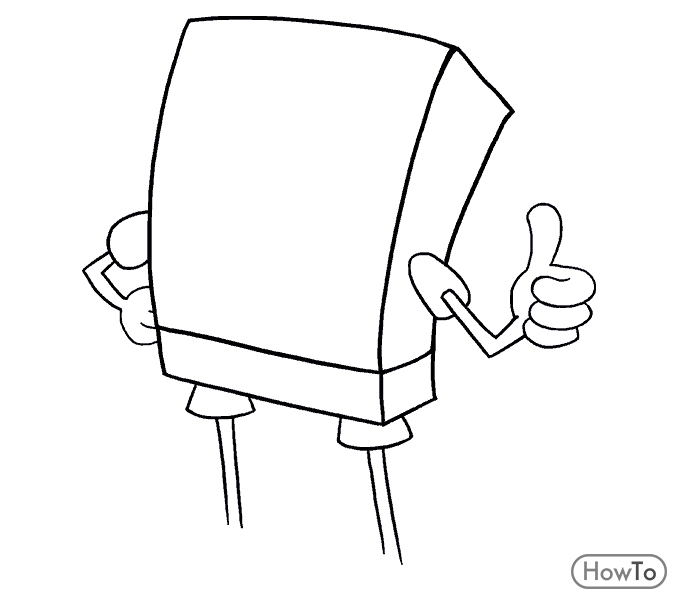 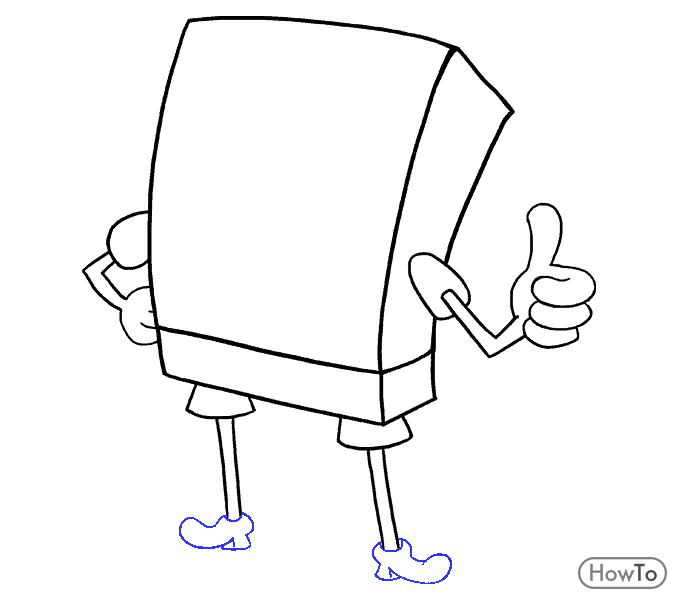 To draw the rest of his fingers, draw 2 J’s on one side and on the other side, draw them again but inverted. 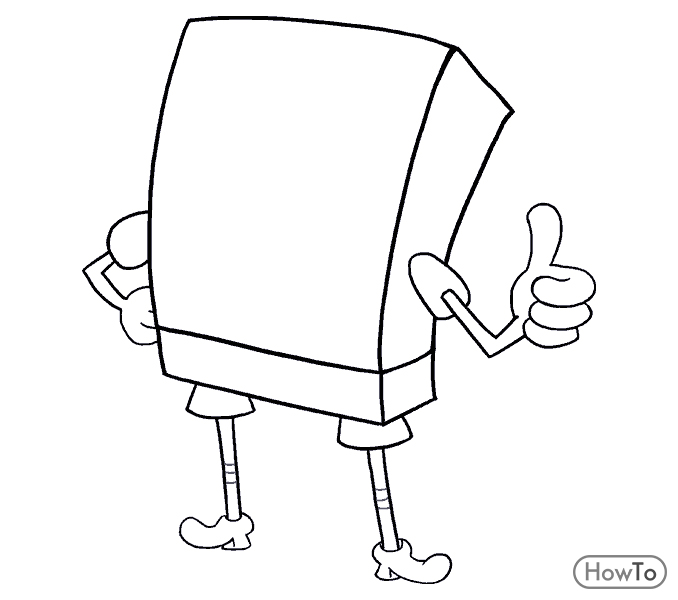 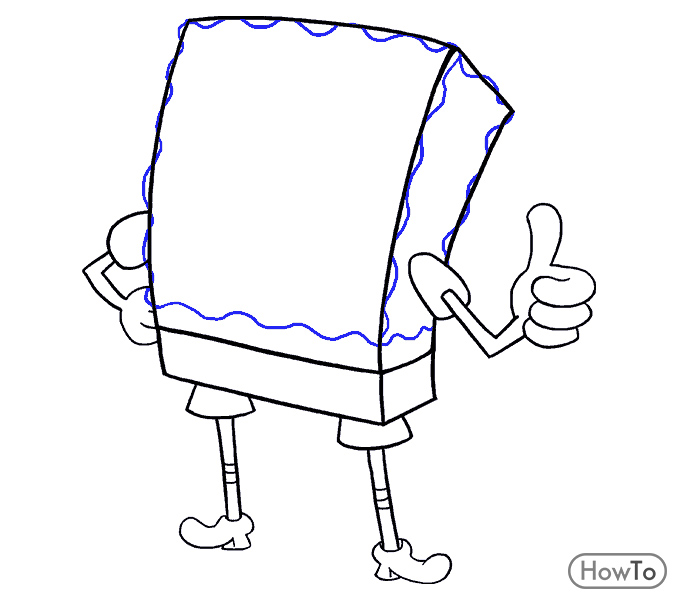 Then, sketch the last finger and draw his legs by sketching 2 curved rectangles. 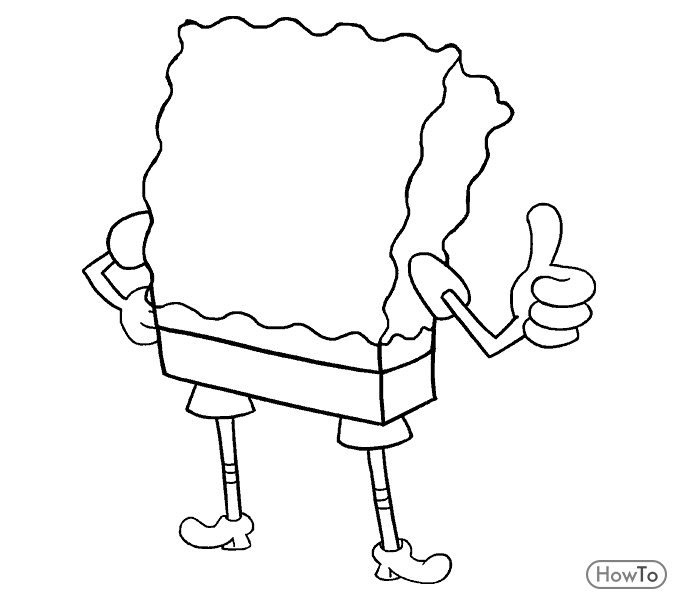 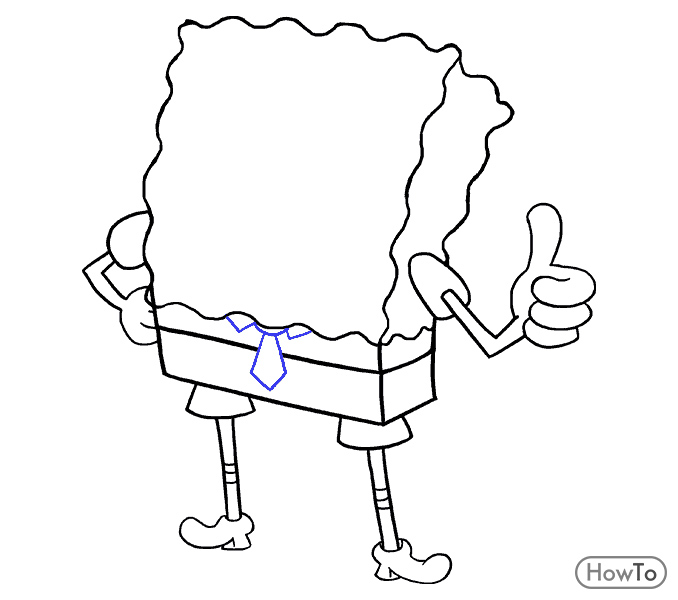 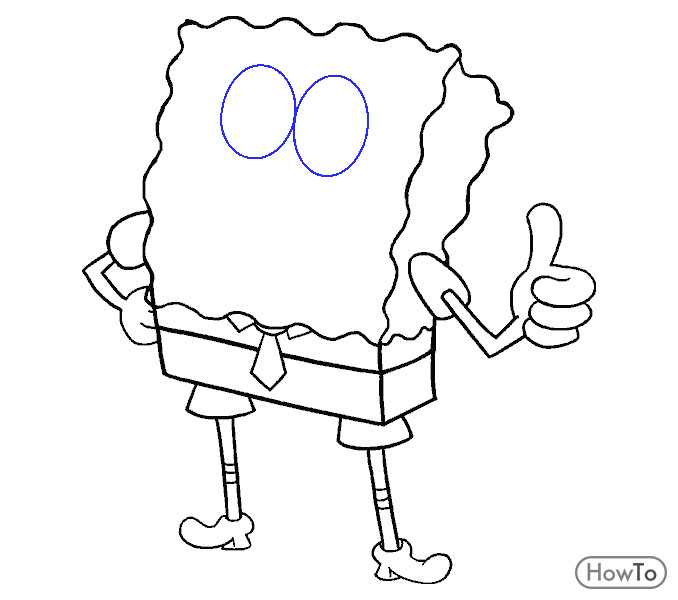 A small rectangle beneath his shoes would act as the heels. 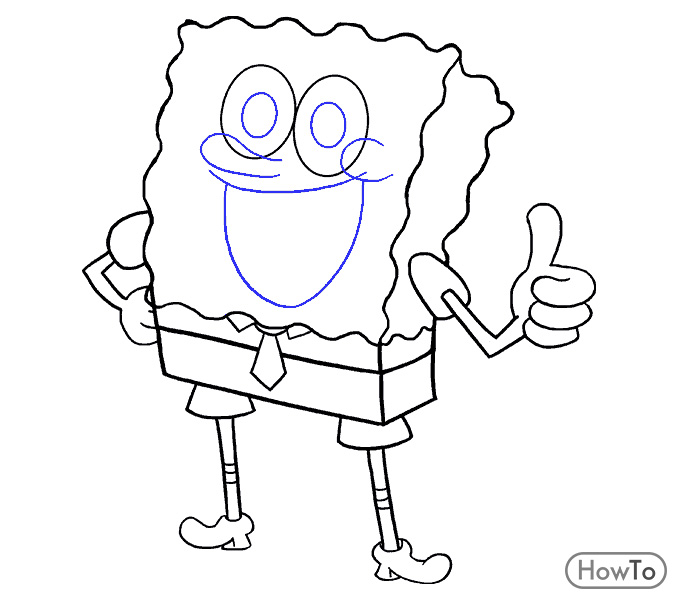 Moving onto the face, it’s time to draw his eyes.

This is the second phase of “how to Draw SpongeBob”. However, be careful because the green arrows aren’t meant to be drawn. They are just drawn to show where the eyes will end. 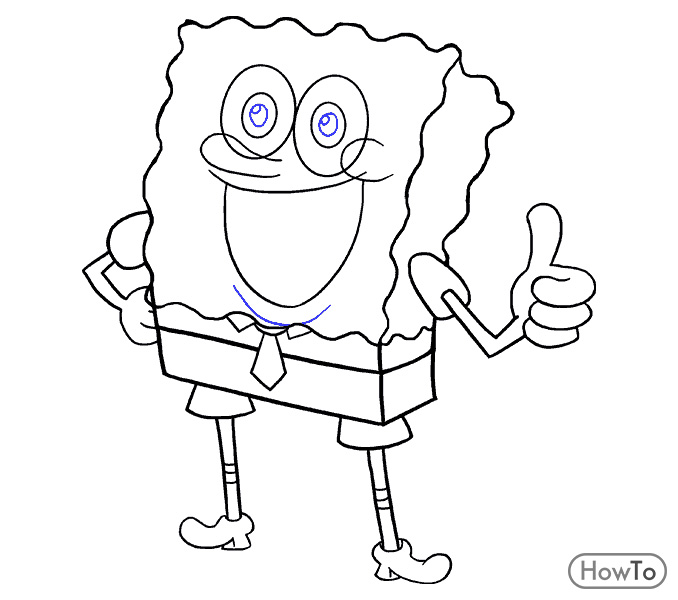 Move onto his nose and cheeks as shown. Also, make a few dots in his cheeks to show his freckles. 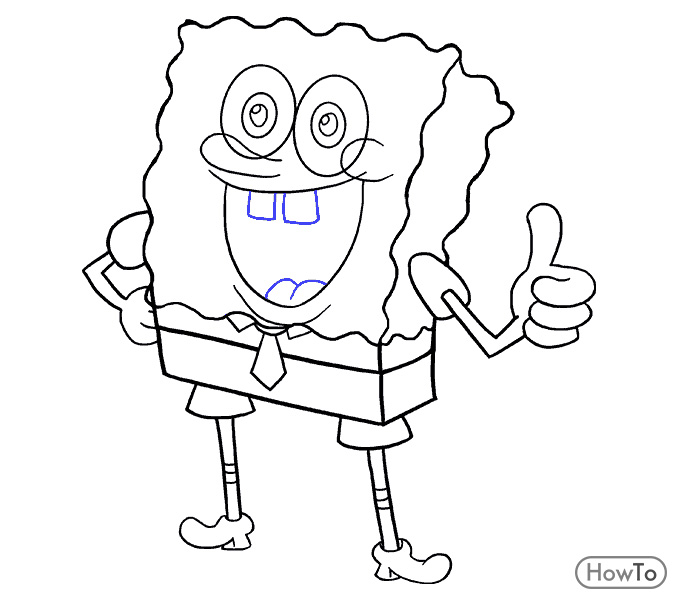 Draw a curved line from one cheek to the other. Also, make 2 curved lines at each end to show SpongeBob smiling. 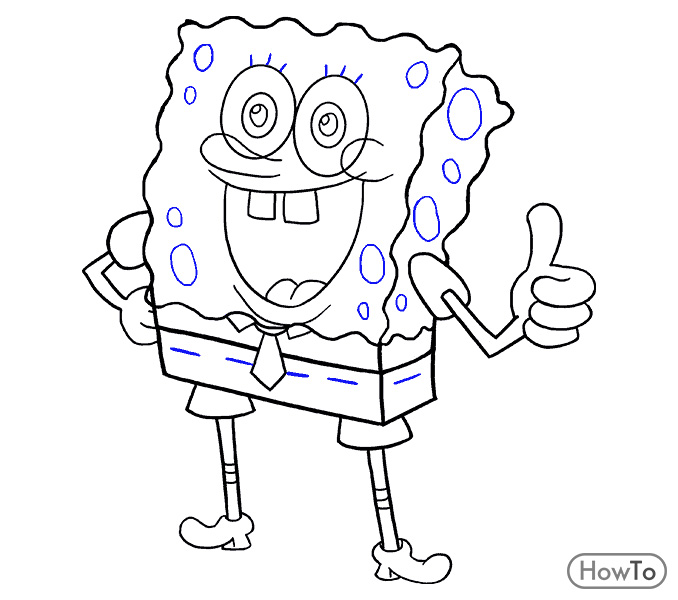 To show his teeth, make 2 half squares, and try to make sure they aren’t straight. Also, make a curved line below the teeth. 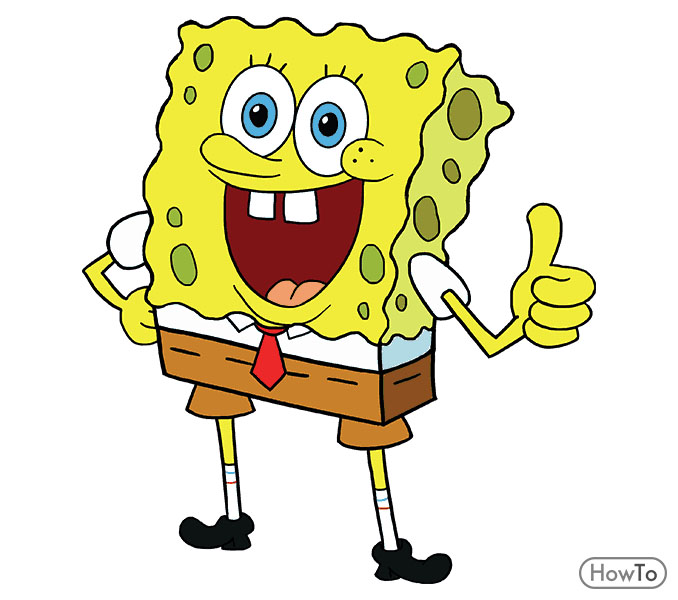 Now to add the finishing touches draw little ovals all over his face.

You’re almost done. Just erase any outlines you might have made and darken the outlines with the help of a marker. If you want, you can also add color to make the picture even better.

To draw SpongeBob is pretty easy if you follow the steps we’ve put forward for you in this post. We’ve tried to break down the bigger steps into simpler ones to make sure you don’t feel lost at any point. So what are you waiting for? Just grab a piece of paper and a pen and get ready to be amazed at how easy it is to draw SpongeBob.

How do you draw Spongebob draw so cute?

How do you draw Spongebob for kids?

How do you make Spongebob sketch?

How do you draw Spongebob’s baby?

How old is SpongeBob?

SpongeBob is 20 years old, but he’s still as sweet and naïve as ever.

How do you draw SpongeBob easy steps?

How do you draw a unicorn?

How do you draw a picture for Peppa Pig?

How do you draw cartoon characters?

How do you start drawing characters?

What is the easiest art style?

What are the 5 basic skills of drawing?

One of the easiest art styles beginners can utilize is realism in artwork.

What do you draw in a mini sketchbook?