At first, using a bong can look confusing, more so if you’ve never used or seen one used somewhere. The truth is, however, water bongs are easy and simple to use. The device is designed to cool and filter the smoke to give you an enjoyable and simple experience. Using a water bong is one of the healthiest, smoothest, and cleanest ways to smoke cannabis. Furthermore, they are a cinch to keep clean.

However, you are in the right place if you don’t know how to use one. Here’s the guide:

Step 1: Understand The Basic Parts of a Bong 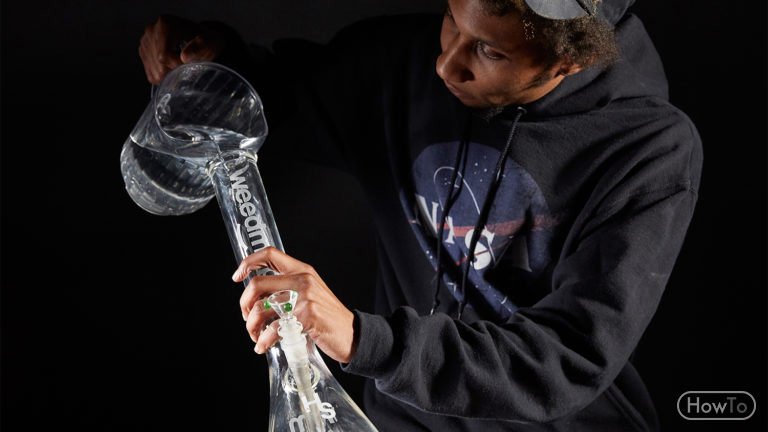 Water bongs are sophisticated but simple to use devices. They are designed with many parts that function together—understanding how the parts work will greatly help you know how to use a bong.

The mouthpiece: it’s an opening towards the end of the tube, a place where you position your mouth. While placing your mouth on the hole, put your lips on the inner side but not over the hole. Slightly purse them, then carefully force them inside the hole to help the outer part of your lips create an airtight seal.

Step 2: Fill The Device with Water

Start by removing the downstem, then fill the chamber with water. Make sure you cover all the holes in the downstem properly, and it must be a bit low to prevent it from spilling out of the carb if you have it.

Ensure water reaches ½ inch past the end side of the downstem. Additionally, the temperature is an issue to take into consideration. Some people love warm, others cold, while many are fine with the room temperature.

Some people claim that using more water reduces your smoking experience with the bong. More water makes you use more lungs’ effort to pull air on the water. Therefore, more water simply means you are struggling harder to draw smoke through.

Also, you can test the amount of water by taking a deep breath on the mouthpiece. Water should only bubble up but should not come to your lips. 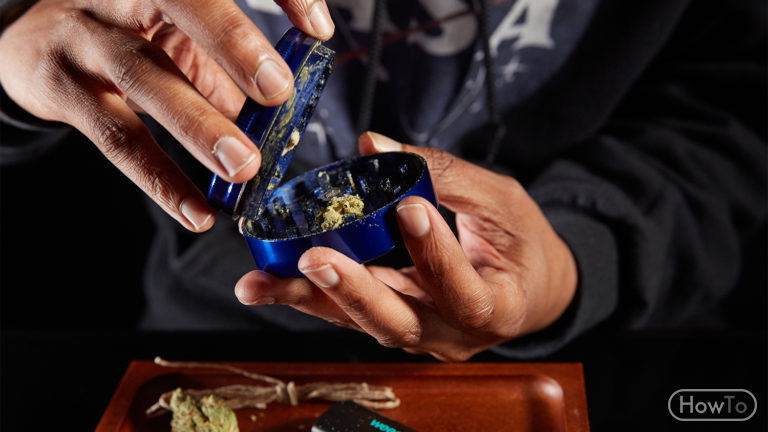 Perks or percolators are little additions on the chamber and the neck that filters your smoke. You can branch them like trees, notched tubes, rounded domes, circular disks, or other shapes depending on the glassblower. Percolators provide more water and air to cool and diffuse the smoke.

Step 4: Add Ice to The Bong

Although optional, ice helps in cooling the smoke, that many people believe facilitate the inhalation process easier. Add some ice inside the water, then allow it cool. Begin by removing the downstem to prevent the ice from breaking on its way down.

Some bongs feature “ice pinches,” where you can pinch the glass to allow the ice cubes to settle properly. Also, other people prefer using hot water on the chamber as the stem helps in bringing moisture to the lungs.

Step 5: Slide the downstem in, and a neat bowl, then take a test drag 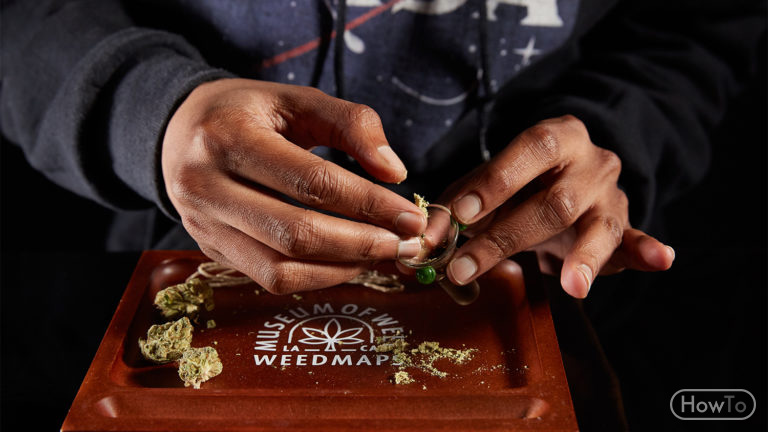 Once done with the test drag, remove the bowl from the device to fill it. You do this to prevent knocking down the whole bong while packing it.

Step 6: Remove Any Large Residue or Ash from The Bowl

Before doing this, ensure that there is proper airflow on the bowl. Carefully blow air on the bowl, then make sure you are feeling the air on the other side, where it’s meeting the downstem. In case air passes through easily, then you are lucky. If it fails, look for a pointy object such as a mechanical pencil or a safety pin, then unpack any dirt on the bowl.

Proper airflow is the key to a smooth milky smoke.

After that, pack the bowl using the smoking material. Be careful not to fill it to the top edge as the smoke produced during inhalation moves away rather than getting inside the bowl.

Step 7: Lastly, Place The Bowl On the Downstem 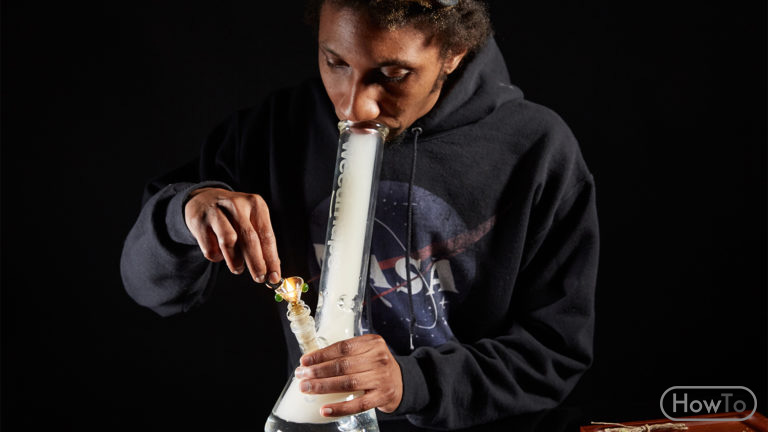 Fix the bowl snugly but don’t cram it inside. Now hold the bong using your non-dominant hand around the neck as it’s designed to fit on your hands. You can also place it on top of the table to reduce the risk of falling and breaking.

If you don’t have a flat surface near you, rest the device between your legs or on your stomach. And if the bong is designed with a carb, grip the piece to allow one finger to plug up the hole. Failure to do this, you’ll end up drawing air out and end up without smoke inside the chamber.

How do you properly use a bong?

What is the point of a bong?

Is smoking tobacco through a bong healthier?

A bong’s central purpose is to cool and filter smoke through water filtration. While it results in a smoother smoke, however, it can also filter out some THC and other psychoactive compounds.

Do you put cold water in a bong?

Water pipe smoking, such as hookah or bong smoking, has a negative impact on lung function and respiratory symptoms, similar to the effects of cigarette smoking, according to new research published in the journal Respirology.

How can I make my bong hit smoother?

How can I make my bong hit stronger?

Glass bongs are sensitive to sudden temperature changes. Don’t pour hot water into a cold bong or cold water into a warm bong! Run the piece under lukewarm water first.

Why does my bong hit so hard?

Faq about bongs and smoother hits

The best way to make a bong toke hurt less is either use ice cubes or glycerin coils. Simply put, coils to your bong that you put in the freezer prior to using your bong. It keeps the bong cooler for long and makes your inhale less hurtful.

How long does a bong take to hit you?

Here are seven ways to improve your bong rips.

Why is my bong not ripping?

While lighting the herb-loaded bowl of a bong and inhaling, the smoke runs over the water and cools down, functionally similar to a hookah. This way, no user is pressured to clear the bong in one hit and feel too high, too fast. Bottom line: the bigger the bong, the bigger the hit.

What is Bong lung?

How long does it take to feel the effects? Weed’s effects appear quickly, usually within 15 to 30 minutes after smoking. It can take one or two hours to feel weed’s effects when it’s ingested.

What is Bong cough?

Why is my bong carburator not working? It’s probably just a poorly designed water pipe. Obviously the carb is placed in such a way that air is still being drawn through the bowl when it is open.

How can I clean my lungs in 3 days?

Of course, researchers said, the new findings don’t mean people should reach for the bong to boost their lung capacity. Pot might irritate the lungs in the short term and cause problems for people with asthma, they said.

How can you stop coughing at night?

Marijuana (cannabis or bong) lung refers to the presence of large apical bullae in patients who regularly smoke marijuana. A definite causative link between smoking marijuana and bullous lung disease has not been established, and the association may just be coincidental.

Do you cough more when you quit smoking?

Coughing is your body’s natural way of clearing these airways. When the cough lasts for a long time after extended periods of smoking, it’s known as smoker’s cough. Smoker’s cough tends to sound different than regular coughing. It involves wheezing and crackling noises associated with phlegm in your throat.

What is a smoker’s leg?

Ways to clear the lungs

Can lungs heal after 40 years of smoking?

Tobacco smoke slows the normal movement of the tiny hairs (cilia) that move mucus out of your lungs. When you stop smoking, the cilia become active again. As the cilia recover and the mucus is cleared from your lungs, you might cough more than usual. This might last for several weeks.