A nicely roasted artichoke is sweet and a beautiful thing. But not all folks have the patience and time to deal with the extra fuss. Therefore, if you need an artichoke and you want it immediately, don’t look further than your convenient microwave. This lets you prepare one in a short period.

However, artichokes look like terrible vegetables to prepare, but in the real sense, they are very easy to prepare. Always begin by cutting the stem and tip from the artichoke. For simple cooking, you can start by boiling it with pepper, salt, and bay. Or just microwave it until its ready to eat. 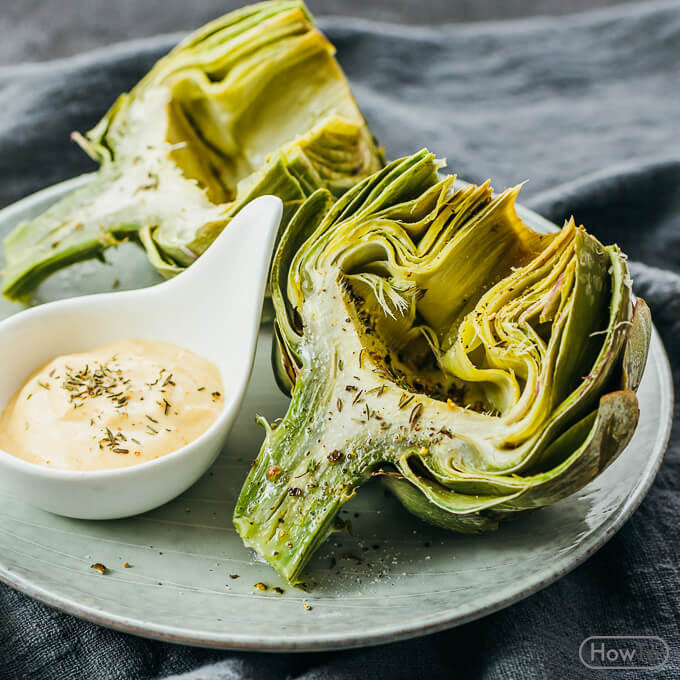 You can also steam it with seasonings if you want to maintain more nutrients. If you need a rich and roasted flavor, cook it in garlic, olive oil, and lemon.

Let’s have a look at how to cook an artichoke in the microwave: 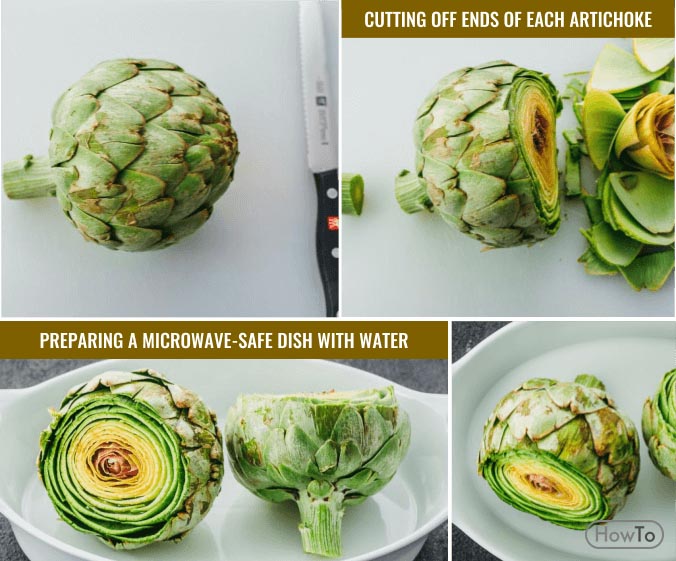 Ensure you begin by rinsing the artichokes. Wash them on the kitchen sink using clean running water. After that, cut the stem off using a knife. Cut about ¼ inch from the top of the artichoke then use a knife or a pair of scissors to cut the pointy sections away from the leaves tip.

You must place the artichoke on the microwave-safe dish with the stem-side facing upwards. You can use a glass Pyrex dish if you want to do the job perfectly.

Make sure you fill the dish with approximately ½ inch of water. After that, squash one lemon on top of the artichokes. Adding lemon juice to the artichoke is vital as the cells in the artichoke bursts in the boiling water. This will create a browning color on the artichoke. 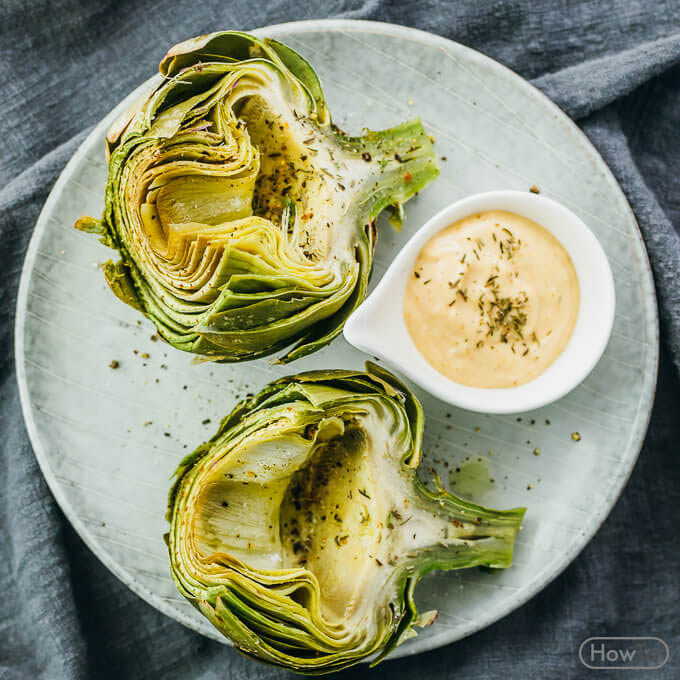 After adding water and lemon juice, make sure you cover the artichoke using a plastic wrap. Doing this helps in trapping steam within the dish that will facilitate an easy steaming. Never skip this step.

Position the dish that you covered on a microwave then adjust your microwave setting to HIGH power. Cook the vegetable for 10 minutes until they are ready. However, the cook duration depends on the wattage of your microwave and the size of the artichoke. The bigger the artichoke, the more time it will take to be tender.

You can insert a toothpick in the middle of the artichoke’s stem to check whether your food is ready. When not ready, make sure you microwave it for an extra minute. A fully cooked artichoke feels like a baked potato.

You must be careful while removing the plastic wrap since the stem will be very hot. You can relax for two minutes immediately after you remove the dish from the microwave before you attempt to open it.do this to be safe. 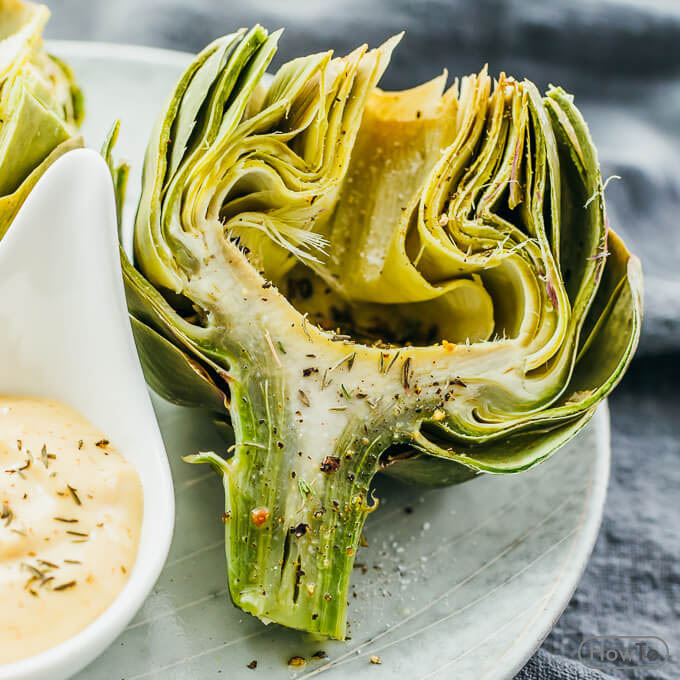 Finally, this is the best part that happens to be delicious too.

Before you start feasting on the artichoke, begin by pulling off the petals each at a time then place them inside the melted butter. After that, place the leaf in your mouth and as you do this, make sure the flesh is facing downwards.

With that done, use your teeth to remove the soft flesh away from the leaf. Throw the remaining part of the leaf.

Once you are done with all petals, you’ll remain with the artichoke’s heart. This is the best part. Use a knife or a spoon to remove the fuzzy, and inedible section of the artichoke. This section is called “choke”

Divide the artichoke heart into tiny pieces then place them inside melted butter. Be ready to be amazed by the complexity and richness in both flavor and texture—the leaves work as an appetizer to the nice part of the artichoke.

Insert a pastry brush in 15 ml of olive oil then cover the cut sides with it. Once done that, sprinkle ground black pepper, sea salt, and dried thyme on top of the artichoke. Serve it while warm.

In case there is a leftover piece of the artichoke, be sure to refrigerate it inside an airtight container. Use it within 5 days.

While roasting, sautéing, and grilling never fit in your time plan, a microwave is an essential substitute that never compromises on the taste of your artichoke. Plus it allows you to feast on a nicely cooked artichoke in a few minutes.

Can you microwave a artichoke?

Place the artichoke in a microwave-safe dish. It needs to be deep enough for the artichoke to sit inside and the lid to completely close. Add about 1/2-inch of water to the bottom. Cover, and microwave for 10 minutes on high (for a medium or large artichoke).

How long should I microwave an artichoke?

Submerge artichokes, cover tops with a heat proof heavy plate to keep them submerged and cook for 35 to 45 minutes or until a leaf in middle can be pulled out easily. Drain them upside down so water runs out. To cook in microwave, wrap each one individually in microwavable plastic wrap and set them in a round plate.

How do you cook an artichoke in the microwave Youtube?

What part of the artichoke is poisonous?

The only part you can’t eat is the hairy choke inside, and the sharp, fibrous outer portion of the leaves. The choke is not poisonous, nor is the tough part of the leaves, but it is a choking hazard, and quite aptly named.

Why is artichoke bad for you?

Artichokes are low in fat while rich in fiber, vitamins, minerals, and antioxidants.

Why can’t you eat the hairy part of an artichoke?

Eventually, you will reach the hairy choke, which is the undeveloped flower at the center. Don’t eat this either! It will literally choke you, and it will just have an unpleasant mouth feel. Instead, remove and discard the choke by scraping a teaspoon along the top of the choke.

Do I need to rinse canned artichoke hearts?

Canned artichoke hearts, as with any canned vegetable, should be gently rinsed with cool water to remove excess salt, and then left to drain completely, squeezing out any excess liquid with a paper towel.

Can artichokes make you sick?

How long does it take to cook an artichoke in boiling water?

Bring water and salt to a boil. There should be enough water to cover the artichoke. Add artichoke to the water, reduce to a simmer, cover and cook until the leaves can be easily pulled off, about 20 to 35 minutes depending on the size. Drain and cool before eating.

Is it better to steam or boil artichokes?

You can boil, grill, braise, or stuff and bake artichokes. But my favorite way to cook artichokes, and the easiest way to cook them, is to steam them. I find that boiling artichokes tends to water-log them, but steaming artichokes cooks them with just the right amount of moisture.

Should I Cut artichokes in half before boiling?

Cut them in half so the steam penetrates the center more easily and the artichokes cook faster and more evenly. Steam them instead of boiling them so they don’t get too soggy from the water and they stay dry enough to get good browning on the grill.

How do you tell if an artichoke is done?

You can tell when your artichoke is cooked by nimbly taking off a leaf. If it falls off easily, it’s probably cooked. But, to be sure – cool it down and take a bite from the bottom of the leaf i.e. the part nearest the innards of artichoke.

What is the best time of year to buy artichokes?

When are artichokes in season? Artichokes have 2 peak seasons: March to June, and again from September to October. California artichokes are usually available all year, but better during their peak seasons. They are expensive, but are often on sale in spring when they are most abundant.

What Bad Artichokes Look Like. If an artichoke’s leaf tips are split, shriveled and dry looking, or discolored with dark brown edges, the artichoke is past its prime and won’t be good to eat.

How long does it take to steam artichokes?

Place the artichokes in the steaming liquid, bottom up. Cover and simmer for about 30 minutes. The artichokes are done when a knife is inserted into the base and there is no resistance. To eat, pull off a leaf and scrape the meat off the tender end with your front teeth.

How do you cook an artichoke without a steamer?

Bring the water to a boil over high heat, then reduce the heat to keep the water at a steady, gentle simmer. Place the prepared artichokes into the metal colander in the pot, then cover the pot. Steam the artichokes for 20 to 25 minutes, then try to pull off one of the outer leaves from one of the artichokes.

Can you cook an artichoke in a rice cooker?

Lay 1 artichoke on its side and cut off top third; cut off stem at base of artichoke. Pour 1 cup of water into the rice cooker for 2 artichokes, and use 2 cups of water for 4 artichokes. Turn rice cooker on and allow to cook for 20 minutes, until tender.

Are steamed artichokes good for you?

In addition to being a fat-free, low-sodium food, artichoke is also rich in key nutrients, including: Potassium. Fiber. Vitamin C.