Did you know that pomegranates are becoming so popular today because of its many health benefits? In fact, many claim that this plant has a range of beneficial plant compounds more than other foods.

If you don’t know what a pomegranate is, here are some important information about this wonder fruit and how you will be able to benefit from it.

What is a Pomegranate? 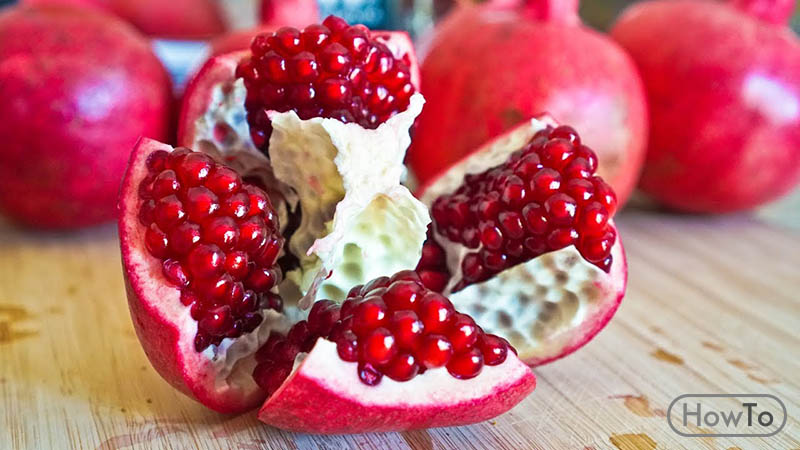 These are round, reddish-brown fruits with a hard, smooth outer covering. They normally grow on shrub-like trees and are similar in size to a navel orange.

During the winter months, pomegranates are in season, making it a good addition to a holiday table.

In comparison to other fruits like apple or banana, pomegranates tend to be expensive. But the fruit and its juice are used by many Indian, Iranian, Greek, Mexican, and Turkish dishes.

At the same time, its juice can be used as an effective natural dye.

How to Use Pomegranate? 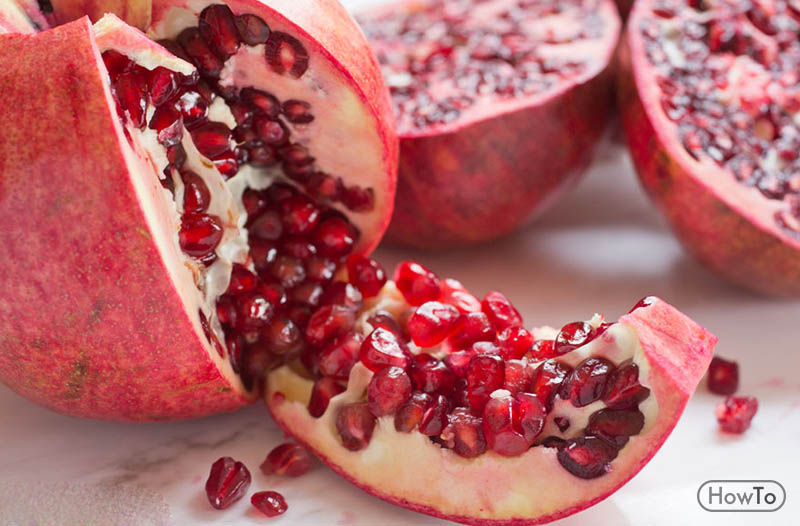 You can eat fresh pomegranate seeds as a sweet-tart snack, garnish or ingredient, or even when dried. You can also extract the juice by pressing the opened fruit.

The fresh juice is sometimes cooked until thick in order to create molasses. Apart from that, you can also dry or freeze the seeds.

However, you must be careful not to stain your fingers or clothes because the juice can be used as a natural dye. So you have to use an apron when working with the fruit so that you can avoid any splashes that might spot your clothing.

You can also stain plastic containers, so it is advisable that you use disposable plastic bags or glass if possible. Aluminum or carbon steel knives and cooking vessels are not advisable because they can turn the pomegranate juice bitter. 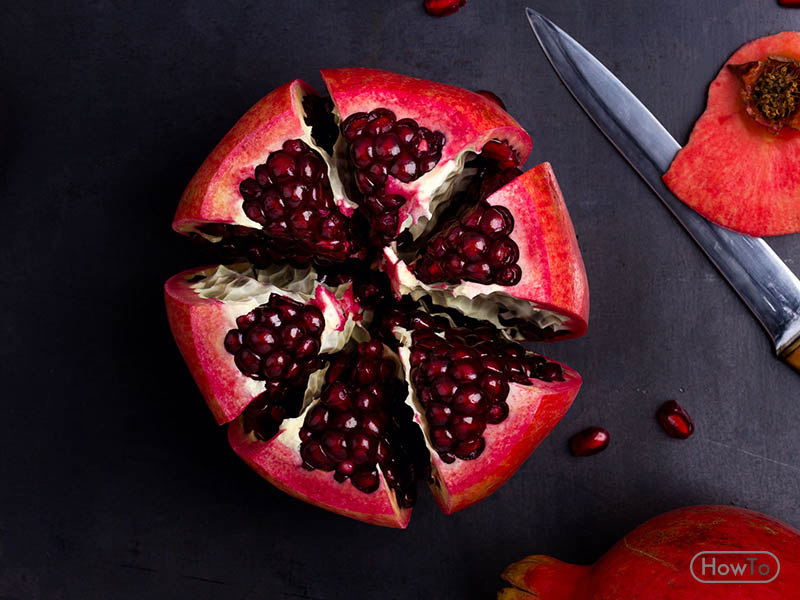 Pomegranate is a juicy fruit having a sweet and tart flavor. In some cases, it is used instead of citrus juice in order to add brightness to a dish or drink. You may also observe that the seeds are crunchy and juicy, while it adds more balance to rich dishes such as dips and stews.

Where Can You Purchase Pomegranate 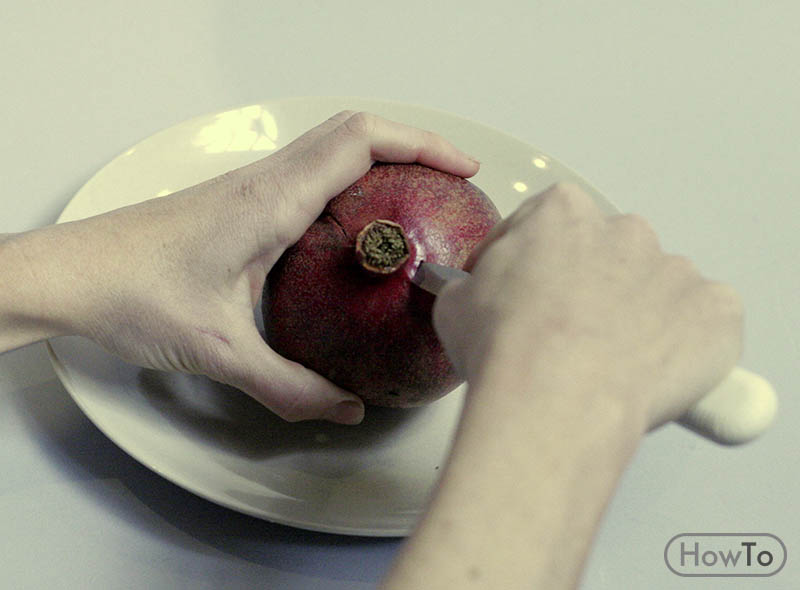 You can buy fresh pomegranates from your local grocery from late fall to early spring season. Most of the time, they are sold individually and priced per pound or per fruit.

If you belong to a region that grows pomegranates, you would be able to find it at your local farmers’ market. But you can buy dried or frozen seeds all-year-round, as well as pomegranate molasses and juice.

You can grow pomegranate fruit trees in regions with similar climates as the Mediterranean, such as parts of California. Pomegranate trees tend to bear fruit after 2 years of transplant, which you can even grow in pots. 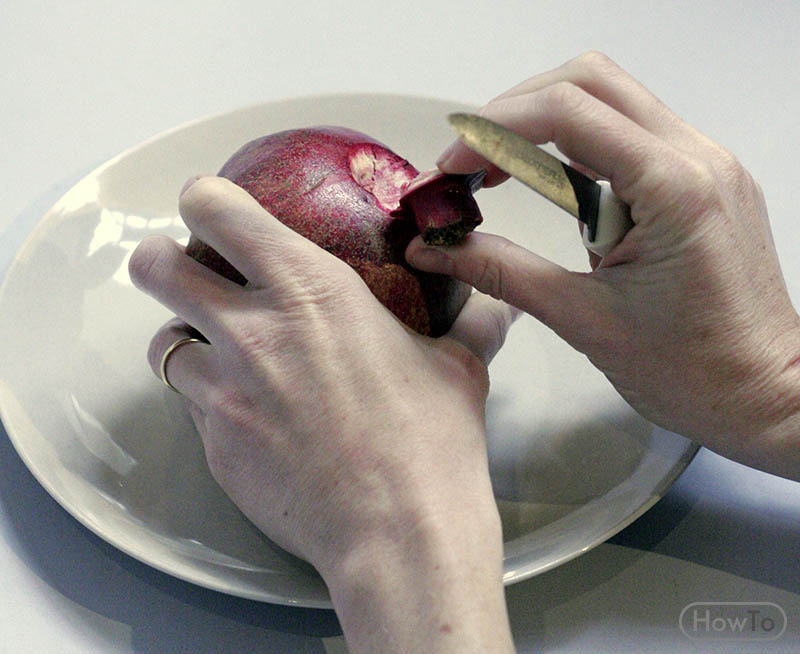 Note that pomegranate juice will stain, but you don’t have to destroy the seeds while removing them.

If you are going to cut them in half through the middle, while using a spoon to whack the arils out of the fruit, it can be messy. Thus, it is not the way to cut it. 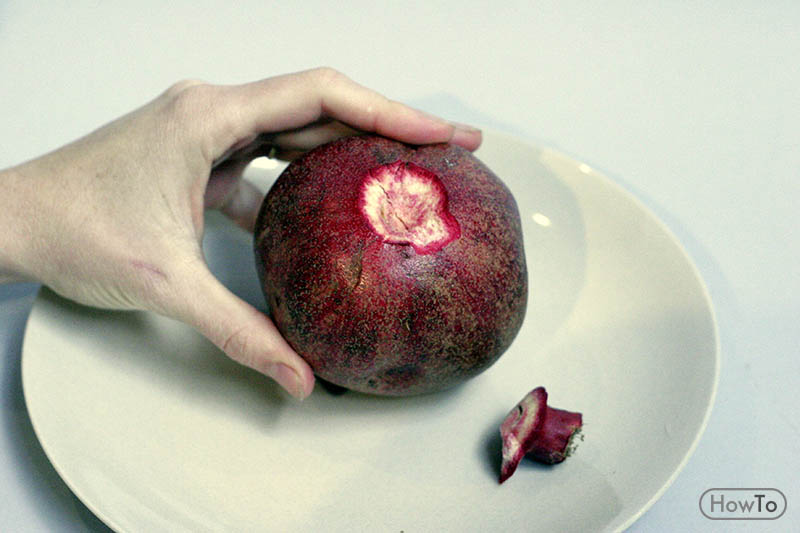 Use a sharp knife to slice ¼-inch off the stem end and place it cut side down to stabilize it. The one that looks like a crown is the blossom end, which should be on top. 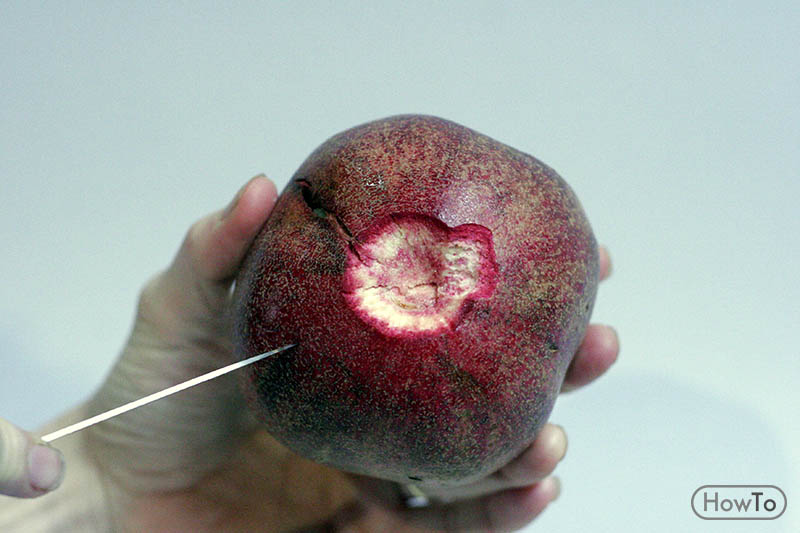 With a paring knife, cut a circle at the shallow angle around the crown, cutting it out. 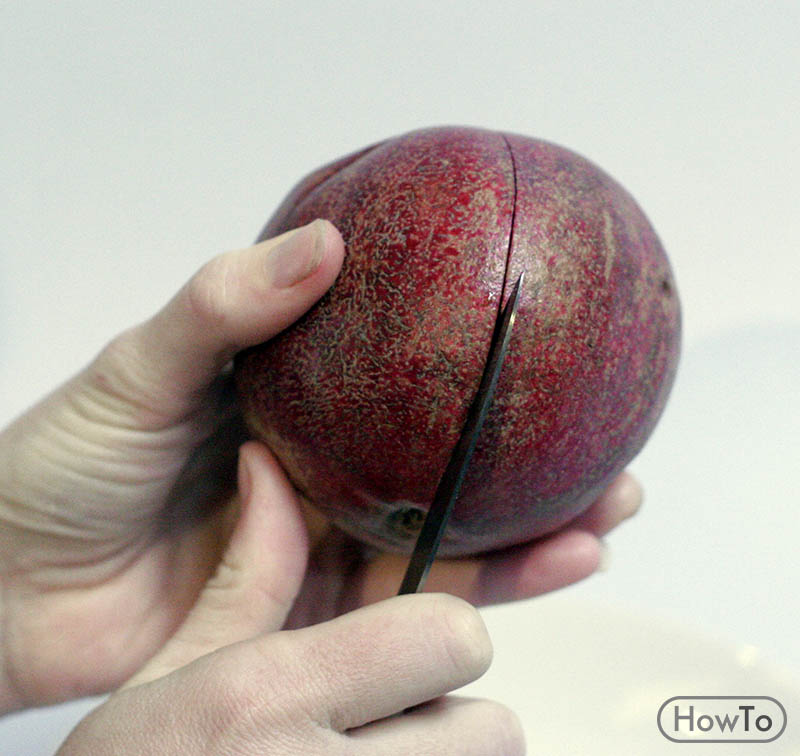 Along the ridges on the outside of the fruit, make shallow, vertical cuts. With a knife, cut along those ridges, going through the red portion of the skin, from blossom end to stem end. This will make around 6 cuts.

If you can’t feel the ridges, it is okay, just make some gentle cuts from top to bottom around it. 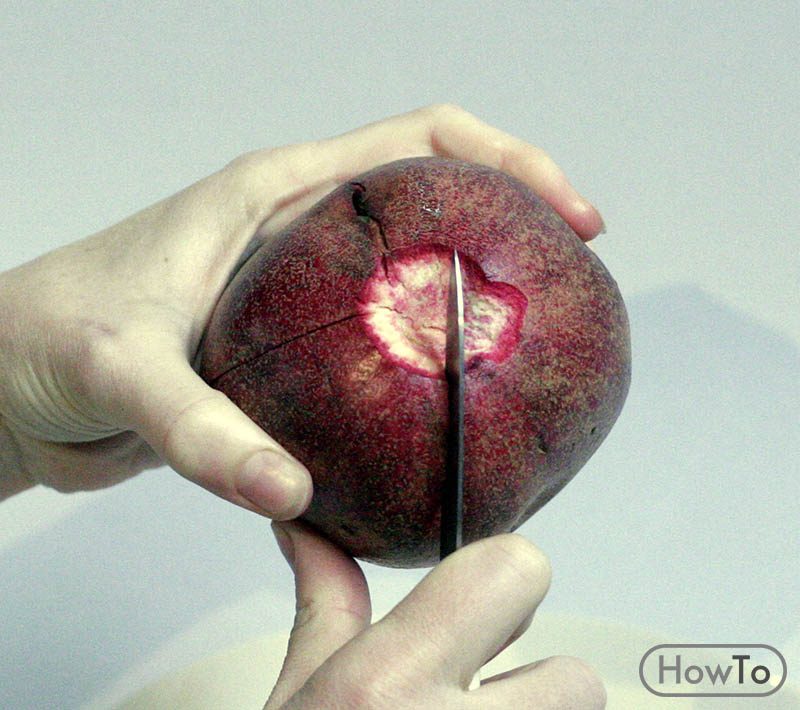 Pry open the fruit gently by using your fingers. The fruit will open easily exposing the seeds or arils. Go on opening the sections, wherein you can pry open 6 sections after making 6 cuts. 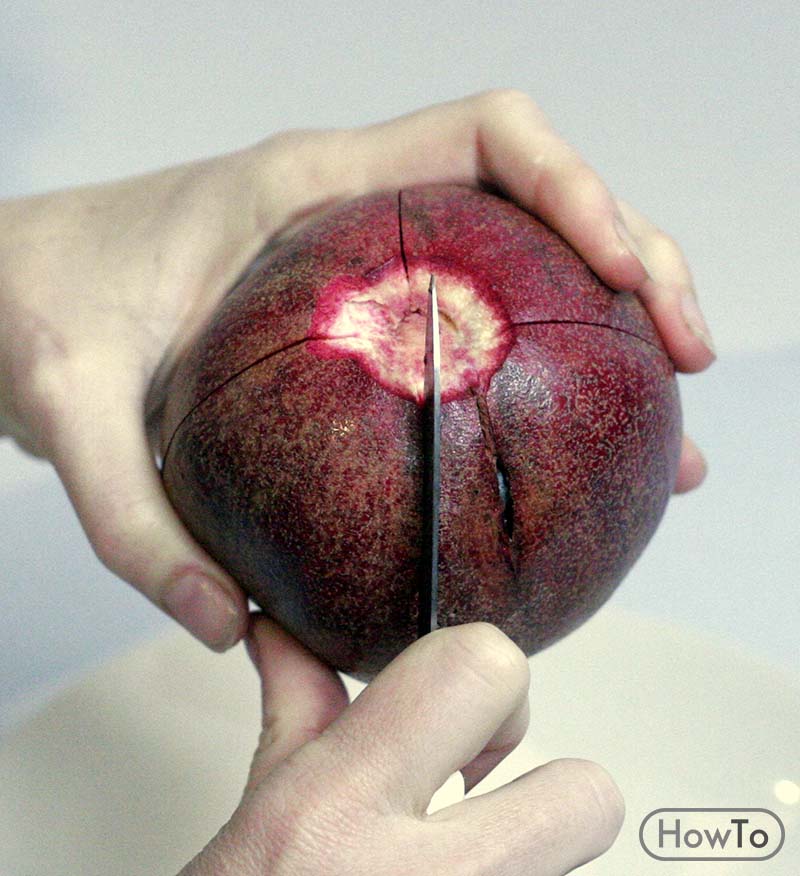 Use a large bowl to contain all the seeds in it as you open. Use your fingers to pry away the arils from the peels and membranes. You may fill the bowl partly with water to make it easier to separate the seeds from the membranes.

Need to skim the membranes from the top of the water and strain the seeds from the bottom. You can put the seeds inside a serving bowl and munch away if you like. Just like the stain that can get into the carpet if seeds fall into it. Chill it in an airtight container for 3-4 days or you can eat it right away. 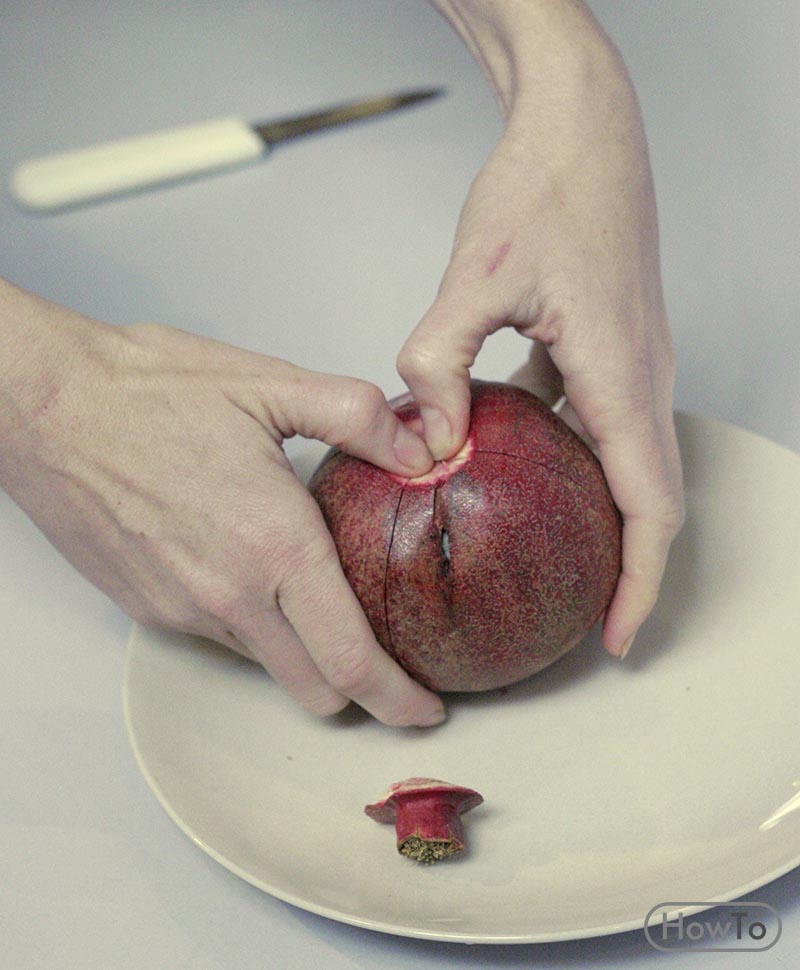 As mentioned earlier, pomegranate or Punica granatum is a shrub that bears a red fruit. It is categorized as a berry, which grows from about 5-12cm or 2-5 inches in diameter. 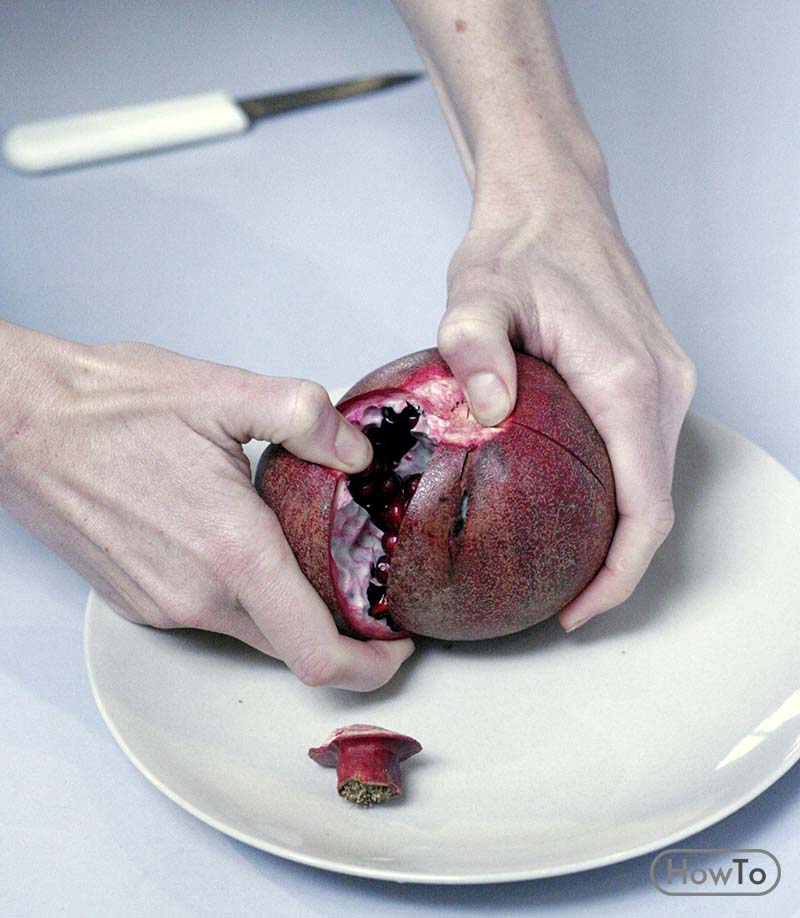 Apart from the attractive appearance of this fruit, it offers a number of nutrients, such as fiber, protein, Vitamin C, Vitamin K, folate, and potassium. The fruit is also rich in powerful plant compounds and some have potent medicinal properties. 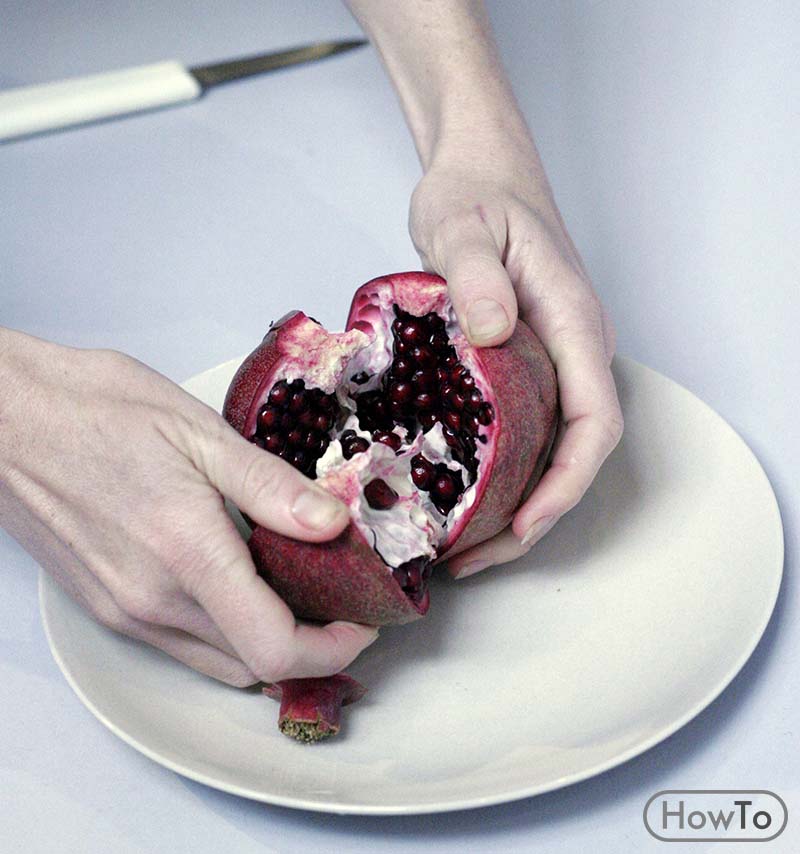 There are 2 unique substances that you can get from pomegranates, which are responsible for most of the health benefits. 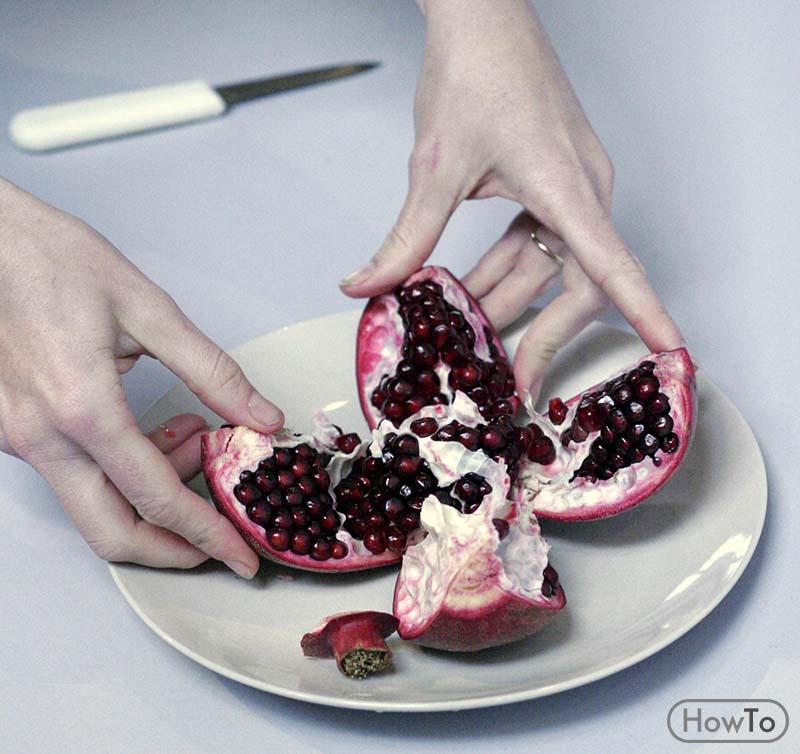 Note that many serious diseases are caused by chronic inflammation. These may include Alzheimer’s disease, cancer, type 2 diabetes, heart disease, and obesity.

Moreover, pomegranates have potent anti-inflammatory properties due to the antioxidant properties of punicalagins.

In fact, a number of studies have proven that pomegranate can reduce any inflammatory activity inside the digestive tract, including colon cancer and breast cancer cells. 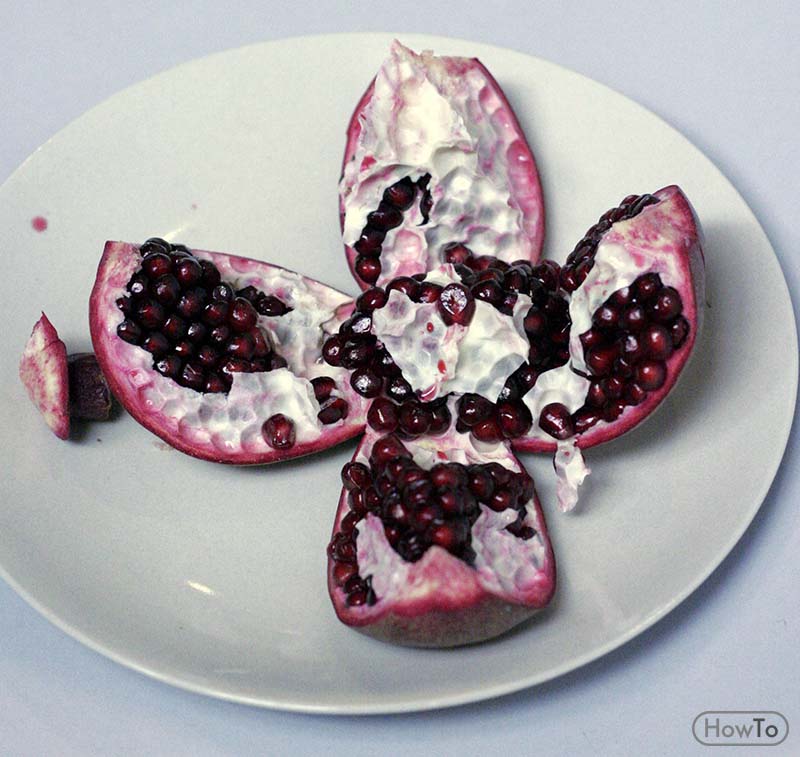 Likewise, people with diabetes who took 250ml of pomegranate juice daily lowered the inflammatory markers interleukin-6 and CRP by 30% and 32%, respectively. 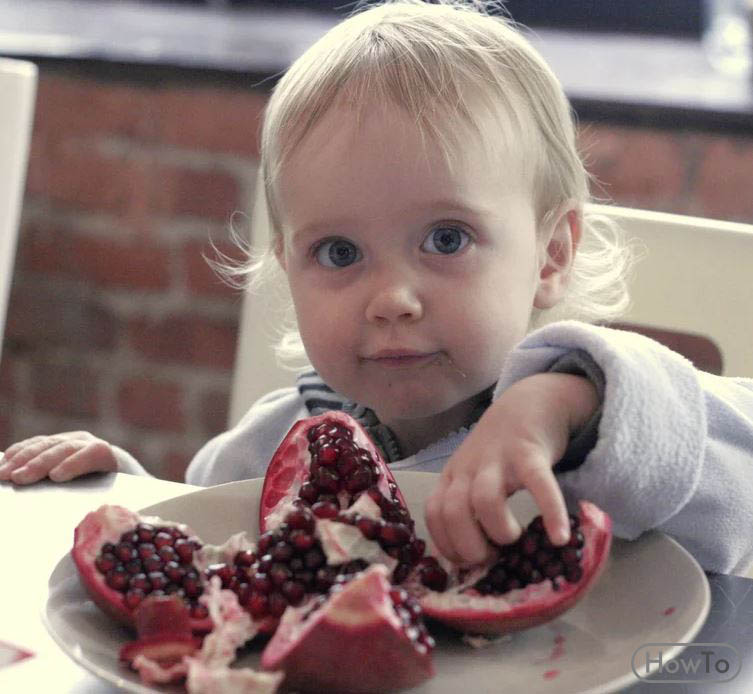 The compounds found in pomegranate have been discovered by scientists to be able to deter cancer formation and progression. Studies show that the fruit holds the promise to fight against breast, colon, liver, lung, and prostate cancers.

What part of a pomegranate is poisonous?

How do you cut and eat a pomegranate?

What part of pomegranate is edible?

Each seed is surrounded by a red, juicy and sweet seed covering known as an aril. The seeds and arils are the edible parts of the fruit — eaten either raw or processed into pomegranate juice — but the peel is discarded.

Do all pomegranates have 613 seeds?

What does a pomegranate symbolize in the Bible?

Second, nearly every part of the pomegranate can be consumed. As the story goes, each pomegranate is said to contain 613 seeds (arils), the same as the number of mitzvot or commandments in the Torah.

Is pomegranate from Jannah?

Pomegranates play an important role as a symbol of righteousness in Judaism, as they supposedly contain 613 seeds, which correspond to the 613 commandments of the Torah. Thus, at Rosh Hashanah (Jewish New Year), Jews eat this fruit one seed at a time, for as many wishes as possible to be fulfilled.

Is pomegranate good in Islam?

Pomegranates – The fruit of Jannah.

Is pomegranate mentioned in Quran?

Pomegranates are one of the paradise fruits mentioned in the Holy Quran. In this regard, Imam Reza (P.B.U.H) says: Eat sweet and sour pomegranates, because it empowers man and refines blood. The Prophet Mohammad (P.B.U.H) states in a holy saying: Whoever eats a pomegranate, Allah will light his heart forty nights.

What does pomegranate symbolize in Islam?

The delicious fruit pomegranate is mentioned in the Quran three times: (Surah Al Anaam, chapter 6, verse 99 and 141 – Surah Ar-Rahman, chapter 55, verse 68). It has a beautiful structure with gem-like beauty covered within layers resembling a honeycomb.

Why is the pomegranate the fruit of death?

Islamic thought placed pomegranate trees in the gardens of Eden and muslims believe that it is a holy tree because of it. For Muslims, the pomegranate is also a symbol of beauty, it is said to give beauty to those who eat it.

What does pomegranate mean in a dream?

What is a pomegranate a symbol of?

Symbol of death and fertility

In Greek mythology, the pomegranate was known as the ‘fruit of the dead’ as it was said to have arisen from the blood of Adonis. Hades, God of the underworld, used pomegranate seeds to trick Persephone into returning to the underworld for a few months of every year.

Why is pomegranate so expensive?

Because the pomegranate is a symbol of fertility, abundance, wealth, life and dreams. It is also a symbol of perfection and rebirth. If you dreamed that you were eating pomegranate, that dream may indicate a quick addition to the family. If you pluck grenades, expect success in business and well-being.

How do you know when a pomegranate is ripe to pick?

A symbol of resurrection and life everlasting in Christian art, the pomegranate is often found in devotional statues and paintings of the Virgin and Child. In medieval representations the pomegranate tree, a fertility symbol, is associated with the end of a unicorn hunt.

Are pomegranates in the Bible?

Most pomegranates have to be imported

Coupled with how difficult it actually is to juice a pomegranate, it’s still an expensive business. In most other countries pomegranates have to be imported, whether it’s the fruit itself or the juice. This means taxes, middlemen, shipping fees and all kinds of markups.

Is the Pomegranate the forbidden fruit?

What is the benefit of pomegranate?

Pomegranates would be another food that Jesus probably ate (a fourth century mosaic shows Christ flanked by pomegranates), as well as apples, pears, apricots, peaches, melons, and dates were grown in the region.