I’m pretty sure you’re familiar with a protractor. If not, a protractor is usually used to measure an angle accurately.

What if there’s no protractor in hand? Worry no more because you can measure an angle even with no protractor. 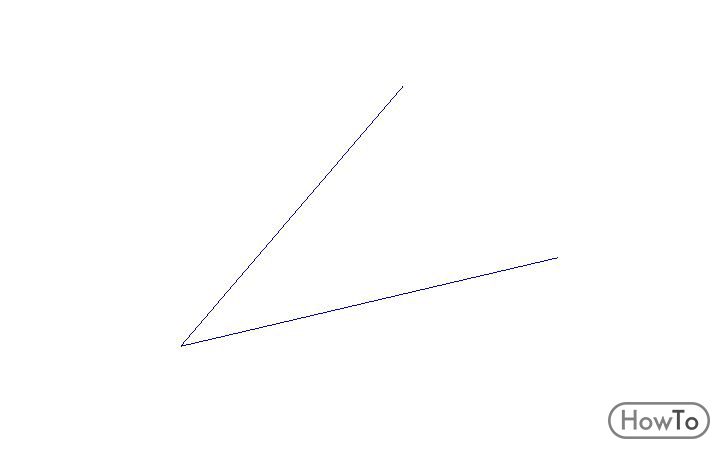 Step 1: Get a ruler and measure the exact distance of both sides from the origin point of the angle (Should be the identical distance for both sides). Take a pen and paper to record all the measurements.

Step 2: Label the distance as “D” and mark the two points on the angle. It should be a length away from the point of origin. Labeling after you measure it will help you identify each angle point easily.

Step 3: Use the ruler again to find the accurate distance between the two points on the angle and record the measurements on the paper.

Step 4: You will need to label the measured distance between the two points as “E.” This is to differentiate it from the previous measurement you did. Failure to record will result in confusion while doing measurements and calculations later on.

Step 7: Solve the angle measure using your graphing calculator. Encode number “2” and press the multiplication symbol. Then press “arcsin” and the value that is half of “D” and “E.”

Step 8: Double-check the encoded values, then press “Enter” or the “=” sign to get the final answer or solution. Make sure you’ve encoded the right values correctly, or you will get the wrong answer.

Step 9: For this formula, you can also use the calculator’s second key to solve it. Just press “arcsin,” which you can see from the same key as the sin.

Step 10: You should get the final answer correctly as soon as you reach this step. If you have a protractor or plans to grab one, later on, you can verify your answer and check if they were accurate or not.

You can also bisect angles without a protactor 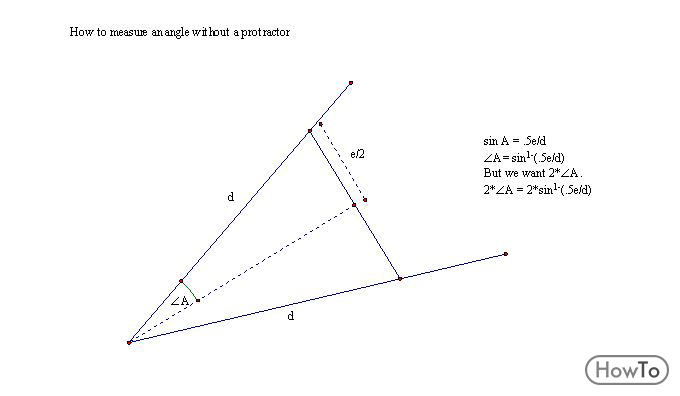 Here’s how to bisect the angles without a protractor:

Step 1: Use a compass to and place it on the vertex of the angle, which is point B.

Step 2: You will need to draw an arc from across each arm of the angle.

Step 3: Position your compass on the point where it intersects an arm and draw another arc on the inside of the angle.

Step 4: Repeat the same process for the other arm without changing the compass’ width so that the two arms will intersect from each other.Step 5: By using a ruler, connect the vertex to the point where the arcs intersect, which is at point D. The bisector of ABC is DB.

Step 6: To bisect the angles, use your compass and ruler for accuracy.

Constructing Special Angles without a Protractor

Step 1: You will need to draw a line segment of points L and M.

Step 2: Draw an arc across LM that goes up over point L.

Step 3: Move the compass to the direction where the point of the arc intersects point LM. Make sure you did not change the width of the compass.

Step 4: Draw another arc that crosses the first arc that you drew.

Step 5: Then connect point L to the point where the two arcs meet.

There you have it! It might be easier to measure, bisect, and construct angles using protractors. However, it’s also good to note that you can actually do it without it. Your geometry skills will also improve once you start doing it manually. So the next time you don’t have a protractor, you’re good to go!

Can you use a ruler instead of a protractor?

A protractor is the usual tool for the job. When a protractor is not available, however, an ordinary ruler and a calculator will suffice. Hold one of the lines so that it is level with the ground.

How do you find the degree of an angle?

How do you find an angle without an angle finder?

How do you find a 30 degree angle without a protractor?

In the exam you will have a ruler and a pair of compasses, which you can use to construct a 60 degree angle by drawing two arcs. You can then draw two more arcs to bisect that 60 degree angle and make a 30 degree angle.

How do you find the degree of an angle with a protractor?

How to measure an angle with a protractor:

How do you find a 30 degree angle?

Place the compass point at B, and using the same radius, strike another arc within the rays. Label as C the point of intersection of the two arcs. Draw a straight line from the angle’s vertex to point C. That line bisects the 60° angle, forming two 30° angles.

What is a 30 degree angle called?

What is a 120 degree angle called?

Obtuse Angle Measure = (180 – acute angle measure) In the picture above, line segment DO intersects line segment OQ at point O and forms an angle DOQ measuring 120°. Thus, it is an obtuse angle.

What are the 7 types of angles?

What is a zero angle?

An angle with a measure of zero degrees is called a zero angle. If this is hard to visualize, consider two rays that form some angle greater than zero degrees, like the rays in the . Then picture one of the rays rotating toward the other ray until they both lie in the same line.

Is a straight line 0 degrees?

Zero degree angles do exist. They are the angle between a line and itself.

What is full angle?

A full angle, also called a complete angle, round angle, or perigon, is an angle equal to radians. corresponding to the central angle of an entire circle. Four right angles or two straight angles equal one full angle.

What is a Perigon angle?

: an angle obtained by rotating a half line in the same plane once around the point from which it extends.

: either of two angles whose sum is 360 degrees.

What is straight angle?

: an angle whose sides lie in opposite directions from the vertex in the same straight line and which equals two right angles.

Which angle is a reflex angle?