The game is also known as a billiard game. It’s like a traditional pool played on a green platform that resembles a similar material used in a normal pool table. Similarly to the traditional pool, the bumper pool is played using wooden pool cues and billiard balls. 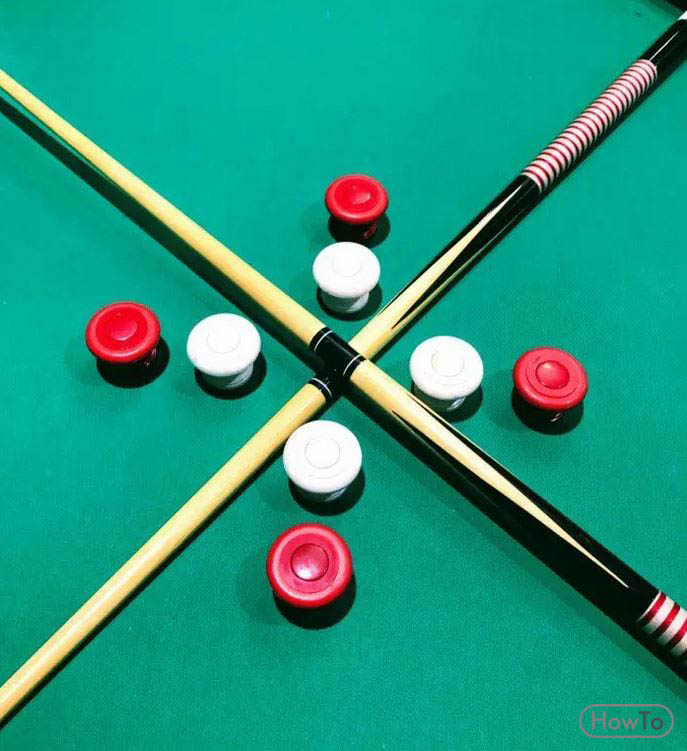 You can play the game on an octagonal or rectangular table that is a bit small in size compared to the traditional pool table. Its measurements are 30 inches’ height, 48 inches’ length, and 48 inches’ width. Furthermore, the standard measures of the rectangular bumper pool table are 33″ by 57.5″ by 41.5″ inches.

Whether playing on an octagonal or rectangular table, the concept and the game layout remains the same.

The bumper pool table has one pocket on each end, and the pockets feature two cushions that resemble goal posts. At the mid of the table are two crossing bumper rows. Smaller tables only have four bumpers on each row, while larger bumper pools have six bumpers.

The bumpers are white or red and are designed with a circular rubber cover that bounces the ball on different sides.

The game objective is easy: lead in sinking the five balls on the other player’s pocket on the opposite side and win the game.

Before we delve into the game rules, make sure you set the game properly.

Place five balls on each end of the surface of the table: five red and five white. As the game starts, make sure you place the balls around the white dotted area that looks like your pocket. The table has two white dots found on a straight line on both sides of the pocket. This sums them up to four.

Then the other dot is located ahead of the pocket. The ball found here is uniquely labeled, and you should strike it first when playing the game. 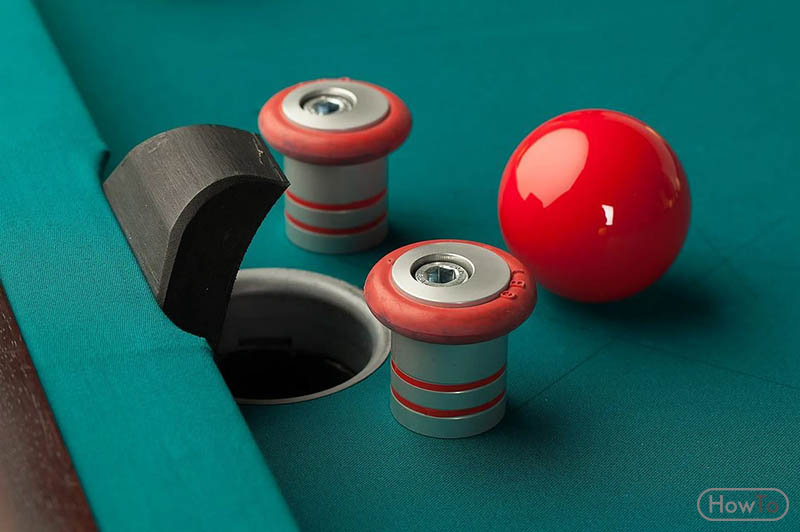 The game is easy to play, although it has a few guidelines to follow. Sometimes they might be hard to follow, but after making several trials, you must get hang of it.

The game involves four players who play it as teams.

To begin the game, decide on a countdown first, then hit all your marked balls at once. Shoot each of the labeled balls towards the correct cushion. The main target here is to insert the ball towards the other player’s pocket or move nearer.

If you shoot your marked ball closer to the cup or in the cup, you get an opportunity to shoot it again. If you and your opponent sink the starting shot, ensure you strike a ball at once the second time. But during the session, each of you must shoot the ball placed furthest towards the pocket on the left side.

The game guidelines get simpler once the game starts. Once you sink a ball, make sure to keep on with your turn. Sometimes it’s rare for this to happen, but it’s easy to sink all the balls before the opponent finds an opportunity. If that’s possible, even your friends will get a chance to play with you again.

When you fail to sink one of the balls while playing, that opportunity shifts to the opponent. This will go on until one of you sinks all the five balls. But once you insert the final ball inside your pocket, you lose everything. 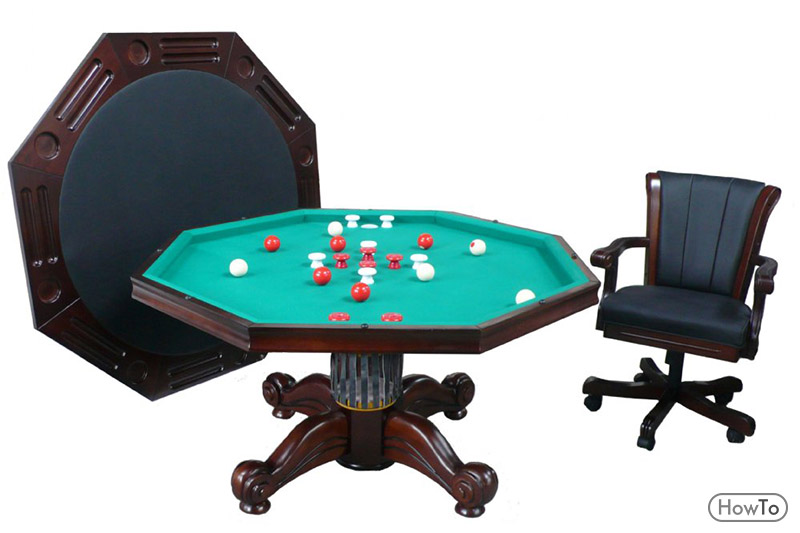 You must pocket all marked balls first. In case you fail to make the marked ball before you mark the other one, then your opponent will sink the two balls freely.

As you watch this painfully, the opponent can position any two balls using their hand in the pocket. So make sure you avoid the embarrassment. Therefore, never break the easy bumper pool game rules.

This policy applies when you insert any of the balls in your pocket or once you hit the ball away from the table by mistake. Even if it was by mistake, the other player gets other automatic two ball scores. The opponent can place the ball that fell in any position on the table.

Generally, if you break the game rules by mistake, you will be at an extreme disadvantage. That’s why you should be mindful of all the marked balls then play the game with finesse, not force.

Immediately you understand the game rules properly; you’ll enjoy it.

Even if the rules are pretty simple, there are still many strategies, techniques, and skills you can use to be a pro.

Here’s what to do: 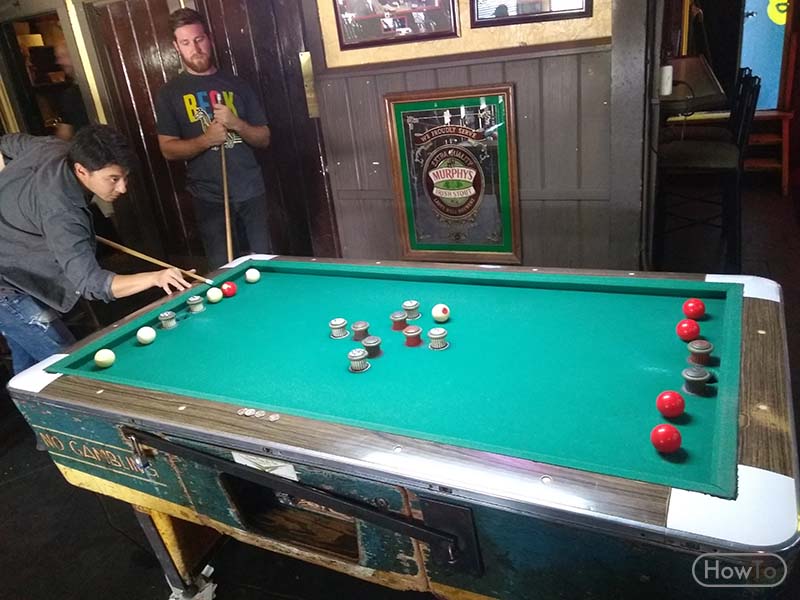 Never think of scoring with a single shot. Also, use the shot to knock the other player if you target to kick them out of position and block their ball. Play the game the same way you play shuffle board. Additionally, you can push the other player’s ball on squeezed areas by positioning them behind or close to the bumpers.

Other players even knock the opponent’s ball towards the middle of the bumpers. But this will call for a re-serve during the second game.

Professional bumper game players can sink long serves or shots. They do this by understanding the exact position to bank on in a way that finishes correctly in the other pocket in the bumper pool table.

During the play, sinking the ball on the serve is a bit tough, and it’s not the best thing to do as many balls clutter the table. Rather than pocketing off the bank, please try to plan for the second shot using two banks.

This is a nice choice where the bumpers are used as storage places where you can redirect all your shots inside the pocket. If you lack the format to directly sink the ball, make sure you store the bumper inside the hole.

How do you play bumper ball?

What is the object of bumper pool?

(I also love Elvis.) Bumper pool’s objective is simple: be the first player to sink all five of his balls into the opponent’s pocket. There is no cue ball, and players simply hit their own balls directly with their cues.

How do you play round pool bumper pool?

To set up Bumper Pool, place two red balls on each side of the white cup. Place white balls in same position around the red cup (pocket). 4. Both players shoot marked ball at the same time, hitting first the side-cushion, banking the ball into or near his color cup.

How do you play bumper pool on an octagon table?

Each player must shoot his ball toward his pocket on the opposite side of the table. To begin the game, both players hit their respective marked balls at the same time, banking them off the side of the table towards their right. Players hit the ball directly in bumper pool, not with a cue ball as in regular pool.

How do you win at bumper pool?

How much space do you need around a bumper pool table?

How far from the wall should a pool table be?

In general, you need at least 5 feet of open space between a pool table and a wall, but how much space you actually need depends on how long your pool cues are. But keeping your pool table at least five feet from surrounding walls is just the minimum. You may want even more space.

Because of its unique table design, it means the rules of bumper pool are also somewhat unique too. Despite its low popularity when compared to other standard billiard games, a lot of people still enjoy playing the game.

How tall is bumper pool?

What is a small pool table called?

Although bumper pool is a lesser-known game in the billiards family of activities, it can be a lot of fun for children and adults alike.

Is a 6 foot pool table worth it?

Just like the traditional pool, the purpose of the bumper table is to ensure that you pocket all your balls before your opponent. It is a replica of the traditional one but on a smaller size. The main difference is that the bumper pool comes with obstacles and two pockets, each at the end of the table.

What’s the difference between pool and billiard table?

Bumper James Morris Pool, as his father indicated, is his full name. At 6’2″ and 215 pounds, Pool is an inside linebacker for Lovejoy who has let his game speak louder than his name this season.

What size pool tables are in bars?

Snooker Tables. Snooker tables in the US are usually smaller and the ones in Europe can be as big as 12 feet by 6 feet. These are larger than pool tables and billiards tables. They can also measure as small as 10 feet by five feet.

If it is all that you can fit inside of your home, then yes! It is worth purchasing a 6–foot pool table. After all, playing pool is better than not playing pool. Smaller pool tables often require smaller balls, and this means that you aren’t really going to be learning how to play pool properly on them.

Difference Between Pool and Billiards

Table Size – Pool tables are at least 3.5′ x 7′ while billiards tables are much larger with a minimum size of 5′ x 10′. Balls – Pool uses anywhere from 9-15 object balls depending on which game you’re playing. Billiards uses 3 balls that are larger than pool balls.

Is a 6 foot pool table too small?