Snakes are one of the most interesting creatures on the planet. Their movement and their hisses may seem off as fascinating but they are also very dangerous to humans and animals equally. If you’ve had a snake infestation, then it is safe for one to know how to tackle these deathly animals. Some snakes are also not poisonous and won’t harm you as much but they still give a very horrible bruised. One should learn how to trap a snake if you want to avoid getting unnecessarily bruised in your home or workplace. 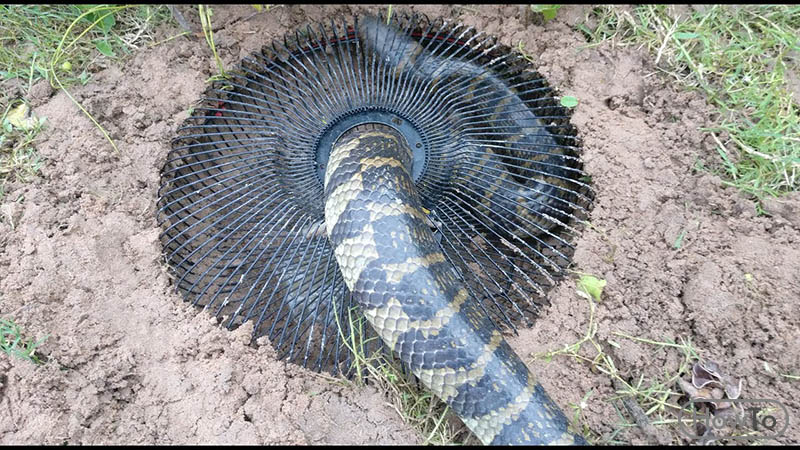 There are many things you might want to consider before you go ahead with trapping a snake on your own. First and foremost, reconsider if you really need to trap it or it fine in its own secluded environment away from you. Secondly, try to gauge the situation and check whether you would be able to pull it off on your own or do you need an extra pair of hands. Lastly, remember to take all the required safety precautions. you don’t want to get hurt while trying to trap a snake.

There are also various methods you can opt for if you want to trap a snake. Choose one that suits you and your surroundings best. Some of the easiest methods to trap snakes are:

One of the widely used instruments to trap wild animals is a minnow. Ease of use is why it is widely preferred by people.  The trap has the mouth like a funnel and is shaped like a trash can. This means the entrance of the mouth of it is wide and easy to go in but as it continues it gets thinner like a funnel. In order to make this method more effective, try putting farm fresh eggs inside the trap. These eggs will work as bait and will help in pulling the snake inside the trap.

You can put store-bought eggs in there as well but farm eggs tend to be more helpful. these eggs haven’t been washed and are fresh. This means that there is a lot of chicken essence on them. Once the snake sneaks inside the funnel-shaped mouth of the trap, you can trap it. It will be impossible for the snake to crawl back outside.

With the help of this method, you won’t have to worry about moving the snake from one place to another when you have to get rid of it. In other methods, there is still of effort that goes into taking the snake and putting it in a different container to dispose of it.

Glue can also be of great help if you are trying to capture snakes. Snakes are wriggly creatures that crawl like a worm. It can be very difficult to catch them because they can run out of your grip and your sight in no time. The best way to tackle this issue by simply putting a good quality adhesive glue on top of your trap. You can use any surface where the snake is bound to come and put some adhesive glue on top of it.  The snake will stick to the glue and stay there. You can use grease or oil when you want to free them.

You can also use a piece of wood and place it inside a box. This way once the snake is stuck it will automatically be in a box. You won’t have to stress about transporting it. This makes the disposing of the snake a lot easier. Similarly, you can put the glue on any surface and place it with bait inside a maze. You can use a cardboard box or any other bin. You can throw it away as soon as you catch it. 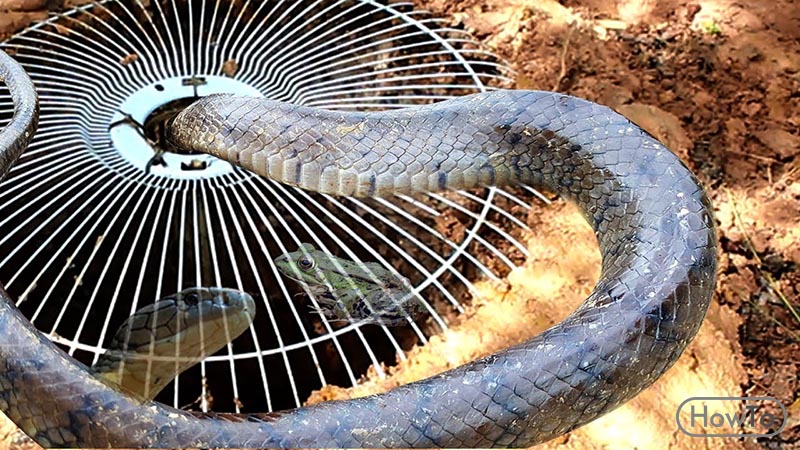 Last up, we have the very common mazes that people use to trap the snakes. These mazes are a little technical.  In these traps, some panels move. As the panels move and rotate in a circular motion, they help provide a path for the snakes to enter. This way the snake can get an entry passage and will then be present inside your maze. The rotating panels are made in such a way that the snake can’t escape back out once it is inside the trap.

There is a lid as well. You can put this lid on and remove it when you want to get rid of the snake. These traps look like a box. The material is more than often wood.

Make sure that the place you chose to dispose of your trapped creature is one that doesn’t have any other inhabitants. The animals might make them its next prey if you are not careful. Be careful and it can be an easy job.

What is the best bait for snakes?

Something like a frog, lizard, crickets, roaches or mice will usually work. This way when the targeted snakes find your trap, they’ll see there is something inside which in turn makes them want to enter.

How do you make a simple snake trap?

The only tools that you will need are a bottle (a water bottle or empty juice bottle), scissors and bait (such as a frozen mouse). Simply cut a hole in the bottle, put the bait inside the bottle and wait for the snake to slither inside.

Is there a trap for snakes?

Harris Snake Glue Traps catch snakes, rats, mice, and insects. The Snake Trap is an odorless and pesticide free way to catch snakes. Trap opens like a book and can be placed flat or L shaped against a wall. The strong holding power of the trap does not diminish over time and should be used in dry areas only.

How do you trap a snake in your yard?

Minnow traps are made of wire mesh and are cylindrical in shape, with holes at either end that invert inside the trap. Just put a few eggs inside to use as bait. The snake will crawl into one of the holes to get the eggs, but it won’t be able to find its way out. Minnow traps are pretty inexpensive and easy to come by.

What attracts snakes to your house?

A snake may be attracted to houses or yards if there is shelter and food that are unknowingly being provided by humans. Taipans and brown snakes eat rodents and they are attracted to farm sheds or gardens where they can hunt mice or rats. The python may eat chickens or other birds.

What smell do snakes hate?

What scents do snakes dislike? There are many scents snakes don’t like including smoke, cinnamon, cloves, onions, garlic, and lime. You can use oils or sprays containing these fragrances or grow plants featuring these scents.

Will vinegar keep snakes away?

The pungent odor of this standard household cleaner repels snakes and acts as an effective snake deterrent. Take some white vinegar and spray it around the perimeter of your property. You can even water it down, which will cost you even less.

Will mothballs get rid of snakes?

Mothballs are commonly thought to repel snakes, but they are not intended to be used this way and have little effect on snakes.

Can you smell a snake in your house?

Yes, you can smell certain Snakes,Snakes can smell different depending on the species of snake but they are often described as musky. Pet snake breeds are often odorless and should not emit any nasty odors. Dried snake poop does not smell and it is often difficult to smell a snake in your house.

How do you know if you have an infestation of snakes?

Signs of Snakes in Your Home

How do you lure a snake out of hiding?

Place a heating pad in the corner of a room and cover with newspapers and a hiding box. Snakes prefer to move along the edges of walls rather than in the open. Your loose snake will not leave if it runs into a warm, safe hiding box with which it is familiar.

Can I take my snake out of its hide?

you really shouldn’t be using a hide that you physically can‘t remove the snake from, this could be a pretty serious safety concern. hides with solid bottoms are fine IF you can open it to access the snake. it’s also not good that he uses this hide wherever you put it, and ignores the other hide.

Where would a snake go if it escaped?

Snakes are likely to settle in behind or beneath furniture or objects. Look along all the walls and in and under any baseboard heating elements. Snakes are unlikely to go into toilets but may very well end up behind them or even their tanks. Hand-held mirrors and flashlights are useful tools.

Can snakes come out of toilets?

The answer is that yes, some species of snake are excellent climbers, and can climb walls. But not just any wall. The snake must have something to grab ahold of and push off of. Not even a rough surface will do – snakes can‘t “stick” to walls the way insects, rats, and lizards often do.

If even the thought of toilet snakes sends chills down your spine, take heart; while it’s certainly possible for a snake to end up in your toilet, it’s extraordinarily unlikely. Fortunately, there’s no guarantee that this snake traveled through the pipes at all.