Beer is one of the most popular drinks around the world. Any cause of the celebration? Tap a keg and let’s do a toast to an XYZ celebration!

These moments become special just because of beer. If you’re one of those people who celebrate little things in life, then this article is for you. Here, you will find the best ways to tap a keg.

Now, why would you want to learn that when you can simply just go to a bar down the street?

We’re still living in a pandemic phase and you might want to keep beer at home and tap a keg. So, without further ado, let’s jump into making some good beer at home. 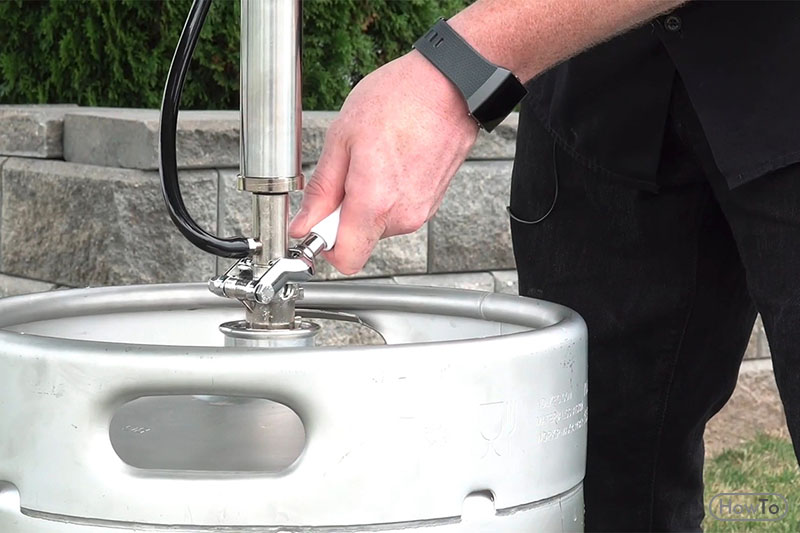 The first thing that you need to do is buy a nice coupler and beer barrel to tap a keg. You may either order it online or simply just get one from the market.

Step # 02: Get a large-sized bucket to fit that beer container inside

You will also need a huge bucket in which you’ll keep the beer barrel for cooling it.

Buy the barrel first, so when you have it, you’ll have an idea for the size of the bucket.

Step # 03: Grab lots and lots of ice cubes to fill in the bucket with ice

Get as many ice cube packets as you can.

You will have to fill up the bucket from bottom to top with ice to cool down the beer. Also, make sure that you keep big packets of ice cubes on top of the barrel. This will keep the beer at the right temperature.

Keep in mind that this step plays a huge role to tap a keg. 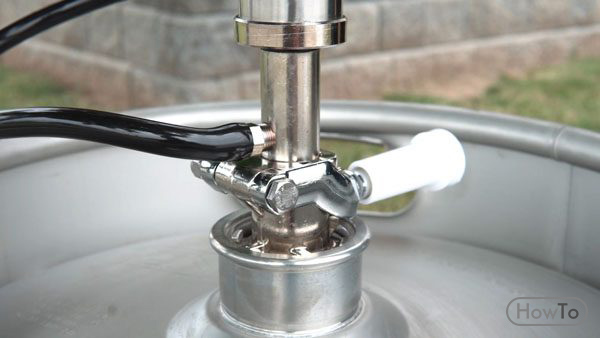 Nobody likes to drink warm and foamy beer.

If you have an event at your place, then don’t end up ruining by doing this in the 11th hour.

You must do the icing around the barrel at least 4-5 hours before the event begins. This is to make the beer reach a temperature that maintains the taste and texture of the beer.

Step # 05: assemble the parts with the container

Now you have to assemble the keg pump into the beer barrel. All you need to do is check the lever handle to make sure it’s unlocked and upright.

Also, make sure that the faucet head is also closed to prevent the flow of the beer. Now carefully examine the part where the coupler needs to be attached.

Step # 06: Make sure the coupler is connected properly to the container and there’s no leakage

Align the keg pump’s tabs with the keg opening. Insert it into the opening and fix it by rotating the coupler until locked into place. Once you have it locked, pull the lever out and then release the lever down.

Now how will you know that it’s attached properly?

Bubbles won’t be forming on the opening of the barrel. If in case, it does, remove the coupler from the keg and then fix it again. 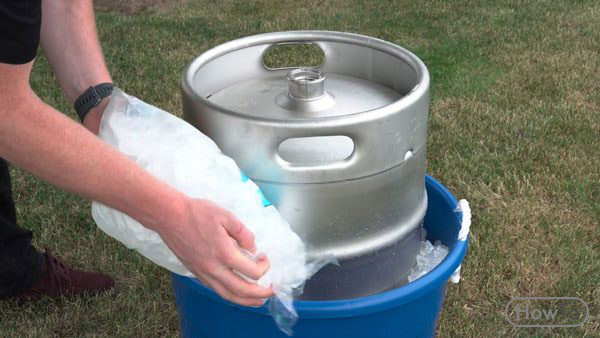 Once you have everything in place, and the beer has been carbonated, it’s time to pour out the beer.

You can tap the keg and the flow will begin from the barrel into your beer glass.

If you start noticing that the flow of the beer is starting to die, then pump the keg. This helps in letting the oxygen get into the barrel and create pressure for the flow.

Make sure that the faucet is still open and only pump no more than 5 times.

And that’s all for the day…

We hope that you find our tips worthy to try and tap a keg. Make sure to keep the ice fresh around the barrel. This will help in keeping the beer texture-rich and not foamy.

This keg can last somewhere between 12-24 hours depending on how much you pump and allow oxygen to flow in. If you want it to last longer, then go for a carbon dioxide-based system which allows co2 levels inside the barrel instead of oxygen.

This will maintain the carbonation in the beer and make it last for days. Make sure to share this with your family and friends. This way everyone can learn how to tap a keg.

How long should a keg sit before tapping?

A: You tap a keg by using a keg coupler.

Do not agitate the keg. If there has been excessive agitation during transportation, allow the keg to settle for 1 to 2 hours before tapping. Make sure the beer faucet is in the off position prior to tapping. Remove the dust cover from the beer keg.

Can you take the tap off a keg?

How To Remove A Keg Tap. Once your keg has been kicked, and the party is officially over, just disengage the tap handle by pulling out and up on it. Then unlock the coupler from the top of the keg.

How long does a keg last once tapped without CO2?

Since a picnic pump uses oxygen instead of carbon dioxide, a tapped keg will only last about 12-24 hours depending on the type of beer and how much oxygen was pumped into it. The oxygen will cause the beer to go flat and spoil quickly if you don’t finish the keg within that time frame.

Is it cheaper to buy a keg of beer?

Basic, domestic draft beers like Budweiser, Coors, and Miller are much cheaper than microbrews and craft beers — a keg of Budweiser is around $100, while something like Dogfish Head is twice that.

How long is beer good in a keg?

Does Walmart sell kegs of beer?

How many beers are in a keg?

How much does a keg of craft beer cost?

How much does a 5 gallon keg of beer cost?

Is bottled beer cheaper than draft?

The general cost-per-ounce for beer in kegs is 40 to 45% less than if it comes in cans and bottles. Therefore, draft beer prices in kegs are sold for a much higher profit. But the pricing strategy for draft beer is the same as canned and bottled beer: try to hit a liquor cost of 20% to 30%.

Are Kegerators worth it?

A kegerator provides over $55 in savings per keg! Plus, you can get the bar experience at home for much less than heading out! Again, we can’t emphasize enough how different draft beer taste from a can or bottle. It will greatly increase your beer experience!

Do Kegerators use a lot of electricity?

Kegerators are appliances that use a lot of energy, but there are ways to keep costs down. Refrigerators of all sorts are well-known energy hogs, but kegerators are among the least costly if they are built right.

A standard keg of beer, also known as a half barrel, is 15.5 U.S. gallons in size. A six pack of beer contains 6 twelve-ounce bottles or cans.

How much is a pony keg?

How much does it cost to buy an empty keg?

At 30 pounds empty weight, a typical stainless steel keg might be worth around $24 (January 2013 scrap price for 304 stainless steel of ~80 cents per pound). While the price of scrap fluctuates, recent history has shown that the scrap value of a keg is easily the same or higher than a typical $20-30 deposit.